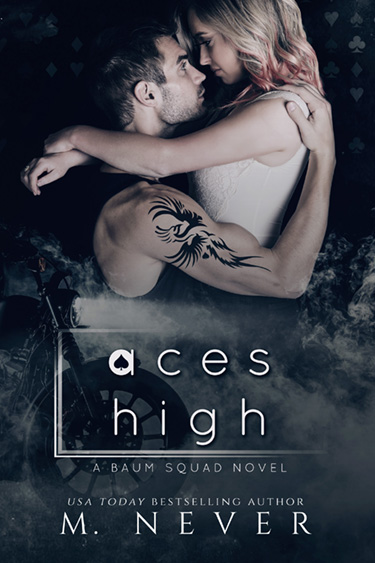 I have two weeks left to live.

Two weeks to come up with one hundred thousand dollars.

Two weeks to convince the woman I love she loves me too.

When The Bowman passed away — my dead father’s best friend and bookie — the payoff arrangement he made with my loan shark died with him.

Now, I have two weeks to cough up the money or else.

The only silver lining? The Bowman’s death brought Liv, his daughter, back into my life.

Ten years ago, all she wanted was my love. What she got was a broken heart instead.

Now I’m in a race against time, fighting for the woman I want back, all while trying to figure out exactly how to stay alive.

Life, I tell ya. It can sure deal one hell of a mutherfkn’ hand.

Damon “Breaker” La Rue and Liv Ward grew up together in the Baum Squad MC. They were friends for the most part, in fact he took her to her prom. Of course it was her father who made that happen while she protested. After a misunderstanding they go their separate ways. Now they are adults, years have passed and the chemistry is off the charts hot.

Liv has come home for her father’s funeral and that gives Breaker the chance he needs to win Liv’s heart once and for all. He is determined to show her he is a better man. The man that is meant for her. Live, however doesn’t trust her heart enough and makes him work for it that is for sure.

There was so much to love about this book.There is enough action and suspense to keep me reading and entertained with more than enough heat to make my heart pound. Liv and Breaker were a great couple and I can’t wait to see what happens next.