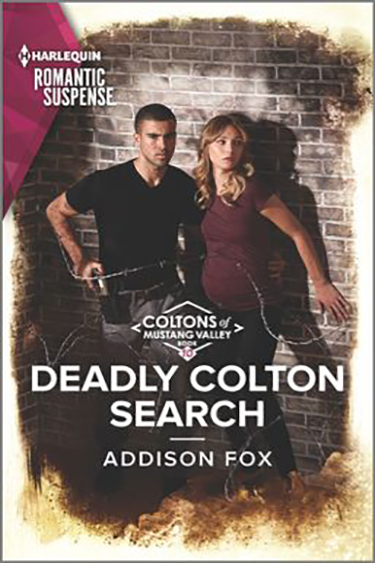 …and finds answers that threaten her unborn child

Young and pregnant, Nova Ellis arrives in Mustang Valley, determined to find her missing father, Ace Colton. In her search, she uncovers that Nik Slater—the PI she’s just hired—is looking for the very same man. Immediately, Nova falls for Nik’s protective nature, a man who cares for her and her baby. But will unexpected danger and long-kept secrets draw them together…or shatter their dreams?

After hearing her boyfriend discussing a drug deal while she is in the bathroom dealing with her morning sickness Nova decides to run. She discovered Ace Colton is her real father and figures he can help her. Of course she doesn’t know what she is walking into when she arrives in Mustang Valley.

She arrives to discover her father isn’t the real Ace Colton since he was switched at birth and he is currently on the run as the only suspect in the shooting of his father, Payne Colton. Well the man who raised him. Poor Nova just wants a little help and to meet her father. Not mention protect her baby.

When she steps into the office of the local P.I. Nikolas Slater she isn’t sure what he can do for her. As for Nik, he already has one Colton case he is working on for Selina, the evil ex step-mother of the Colton children. That woman is up to no good, I swear she is! I haven’t figured out her game yet but I am hoping she gets what she deserves. Nik decides to help Nova meet her family and when she is attacked he becomes her protector. He isn’t sure he would be a good husband or father but she can’t help how he feels about Nova.

Addison Fox did a great job with this one. Nova was a lovely character an I enjoyed her very much. She hasn’t had an easier time lately with her mother dying of cancer, finding out that man she thought was her father wasn’t, and discovering she is not only pregnant but pregnant for a drug dealer. She has a good head on her shoulders and when she meets the Colton’s for the first time she insists on a paternity test.

Nik is also a good character. He loves and wants Nova and her unborn child but he has some issues that make him feel unworthy. He decides to help and protect her figuring that would be all he does but I found myself rooting for them to get together very early.

All in all this was one of the best books of the series. If you are wondering about Payne, he is still in his coma but we only have two books left in the series after this one so something has to happen soon.

Addison Fox can’t remember a time when words weren’t a part of her life. In addition to being an avid reader, she loves writing novels about strong-willed and exciting heroes and heroines – individuals who are meant for each other and who deserve their happy ever after. After she makes them work for it, of course!

First published in 2010, Addison has written across romance genres including paranormal, contemporary and romantic suspense. A romantic at heart, she’ll take her heroes any way she can get them – from ancient warriors to computer geeks to sexy cowboys. She’s not picky – but she is deeply grateful her readers are willing to come along for the ride.