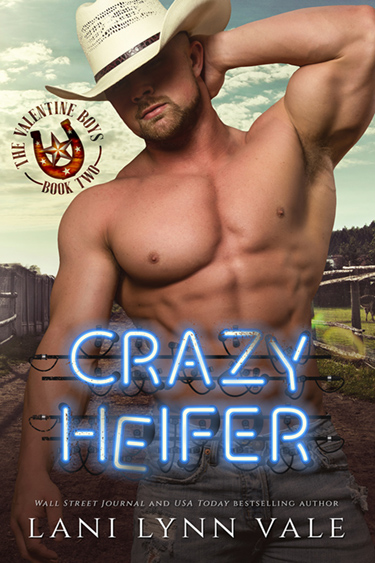 I fell in love with his rope skills. I stayed because somehow he took hold of my heart and made it his.

Callum Valentine didn’t mean to eavesdrop. Then again? When a man is calling a woman fat right in front of your table, it’s kind of hard not to intervene. Especially when the town’s most beautiful creature ever is the one being called fat.

Desi just wants to be left alone. After an ugly divorce, she thinks she’s in the clear. Then her ex takes it upon himself to continue to make her life miserable, giving Desi no choice but to take it or leave.

In fact, her bags were nearly all the way packed when Callum poked his nose into the most embarrassing spectacle the town of Kilgore has ever witnessed. The moment he declares her his and off limits, everything changes—and definitely not for the better.

As if things couldn’t get worse than being called a pitiful, fat heifer in front of the hottest man she’s ever seen, Callum has to go and say that she’s his, and they have to play a game that she’s not quite sure she wants to be playing.

But before her eyes, things change. And suddenly the rules of the game aren’t clear. And they’re crossing boundaries neither one of them see coming.

I loved Desi! I really did! This poor girl has the ex from Hades but she refuses to give in to him. I would have punched him in the face. So many times in this book book would I have punched him in the face. He really got on my nerves. Desi is full figured and doing her best to get fit enough to run a marathon. I am currently in that same position so I can relate to how difficult this is at times. Of course having her ex call her fat all the time doesn’t help. Did I mention how much I hate him?

For as much as I hate her ex I love Callum that much if not more. From the moment he hears to ex call Desi fat, in public no less, he is ready to defend her. He thinks she is beautiful just the way she is. However I also love how much he supports want she wants to do and helps her with it.

There are plenty of sexy times in this book and I love how the Valentine boys all still live together in one house. I also love their reaction to Desi cooking. If you aren’t familiar with the Valentine’s let me bring you up to speed a little. When they were young they suffered a tragedy. Once in which their father killed their mother and two siblings as well as himself. However he attempted to kill all of his children. We learn of this in Georgia (Callum’s sister) and Nico’s book, Double Tap. It is mention again in this book. That event has left all of the Valentine children with scars and issues.

It defined the adults they would become. However, one things that I have noticed is that while they are broken, they are much stronger than I would think they should be. They came back to the town and farm where everything happened. They are making their own way and their own memories. They are making a stand together and saying their past isn’t the sum of who they are. Everyone in town knows what happened to them and I can only imagine that has to be hard at times.

Desi and Callum could not have been more perfect together. They came together easily but then you have the crazy ex who honestly needs therapy. So you can just imagine the drama he brought to the mix. I loved Desi’s former father in-law. I thought he was perfect and added so much warmth and love to the book. There were a few tear-jerking moments but all in all this was my favorite of the series so far. I have a sneaky suspension that the next book is going to claim that spot after I read it.