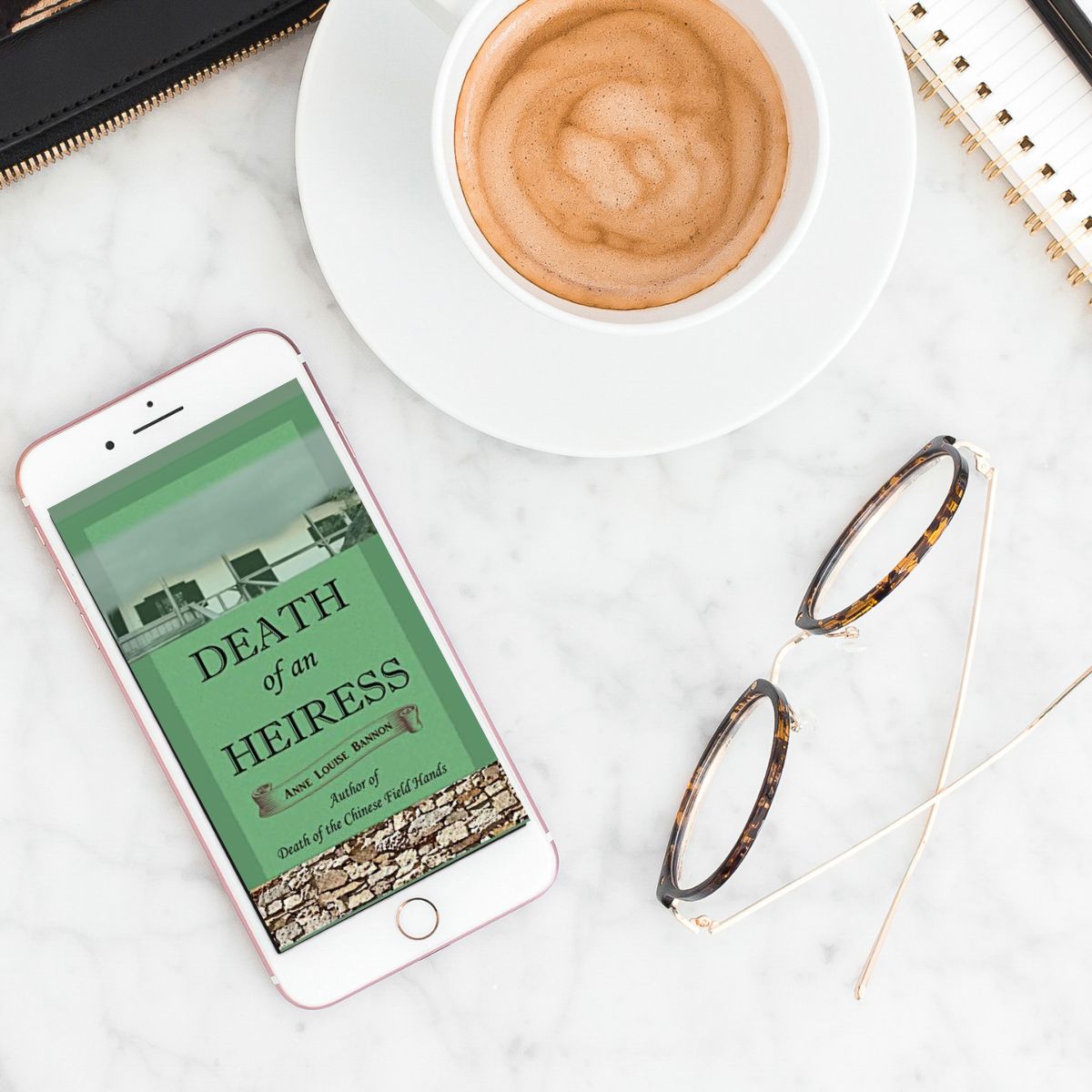 I am thrilled to bring you a little taste of Death of an Heiress by Anne Louise Bannon today. I have the privilege of sharing with you a Journal Entry for Madeline Wilcox. It will give you a bit of the daily life in 1872. Take a read and learn more about the book.

Death of an Heiress

It starts when the inheritance that Lavina Gaines was to receive is stolen by her brother Timothy. Then an old Indian healing woman is murdered. Winemaker and physician Maddie Wilcox wants to find the person responsible for Mama Jane’s death, but is also occupied with another killer – the measles.

When Lavina’s friend Julia Carson dies trying to rid herself of a pregnancy, Lavina asks Maddie’s help finding the man responsible for Julia’s child. Soon after, Lavina is killed and her murder bears an uncanny resemblance to that of Mama Jane’s. The only motive Maddie can find involves Julia’s death, which is not the sort of thing one talks about. Not only that, Lavina’s nether garments are missing.

It’s a difficult challenge, but Maddie rises to it, searching among the many men of the pueblo, including some of her dearest friends.

How does a proper lady in 1872 get the answers she needs to stop a killer determined to stop her first?

The Old Los Angeles series of historical mysteries are supposedly based on the memoirs of one Maddie Wilcox, a winemaker and physician in the 1870s. In the books, Maddie is pulling from her extensive journals as she writes almost fifty years later about her life in what was then a relatively small, but growing pueblo. This is a look at what might have been the original journal entry for one of the days in Death of an Heiress, book four in the series.

More and more measles! Most of the patients seem to be children of a good age to survive, and they are. I am very glad I have laid in extra stock of the salve that Wang Fu has prepared, but if this continues much longer, I fear there will not be enough to be had.

Two letters written in morning to Abby and Carrie – had a lovely one from Abby on Friday. Requested sugared violets from Carrie and included draft for the expense of shipping them to this miserable place. I suspect it will still cost less than fetching them at that despicable Mr. Larson’s emporium. I also fear that Carrie will fail to deposit said draft and send the violets to me, nonetheless. My sisters are so very kind, but it is quite aggravating to have to keep track of a draft that is never deposited.

I am still vexed about the result of the inquest on Mama Jane. Dissipation, indeed! The poor woman was starving, no thanks to that jackass Father Gallar. And when I went after lunch yesterday to confer with Judge Gresham, that other jackass Mr. Alverno refused to let me see him. Had the effrontery to suggest that it was no concern of mine! Never mind that our newspaper is perfectly capable of reporting things in error.

Sñr Dona continues to recover nicely, and the good sisters are seeing to it that he keeps calm.

Rested as best as possible, yesterday being Saturday. Even for a Saturday, last night was exceptionally busy. Elena and I did not even get to St. Vincent’s before she was called away to deliver Mrs. Lawrence. (A fine baby girl, according to Elena, both mother and daughter doing well.)

And when I got to the hospital, two young people with broken bones from a buggy accident already there.

And then the violence started.

Mr. Thaddeus Giddings, 25, knife wound to face, surgery to repair nose, extra ether as he was quite agitated and inebriated, Elena assisted. Laud in 4 oz angl for pain.

Returned home as clock struck three. Managed to make services, Elena did not – her mother refused to wake her. Elmwood as tiresome, as usual. Will visit patients later this afternoon and make notes then.

Anne Louise Bannon is an author and journalist who wrote her first novel at age 15. Her journalistic work has appeared in Ladies’ Home Journal, the Los Angeles Times, Wines and Vines, and in newspapers across the country. She was a TV critic for over 10 years, founded the YourFamilyViewer blog, and created the OddBallGrape.com wine education blog with her husband, Michael Holland. She is the co-author of Howdunit: Book of Poisons, with Serita Stevens, as well as author of the Freddie and Kathy mystery series, set in the 1920s,  the Operation Quickline series and the Old Los Angeles series, set in the 1870s. Her most recent title is the current stand-alone, Rage Issues. She and her husband live in Southern California with an assortment of critters.

Enter to win a gift package of all four books in the Old Los Angeles series.

I want to give a huge thank you to Great Escapes Book Tours for putting tis tour together. I am more than thrilled to be a part of it.

Have you signed up to be a Tour Host?Click Here to Find Details and Sign Up Today!