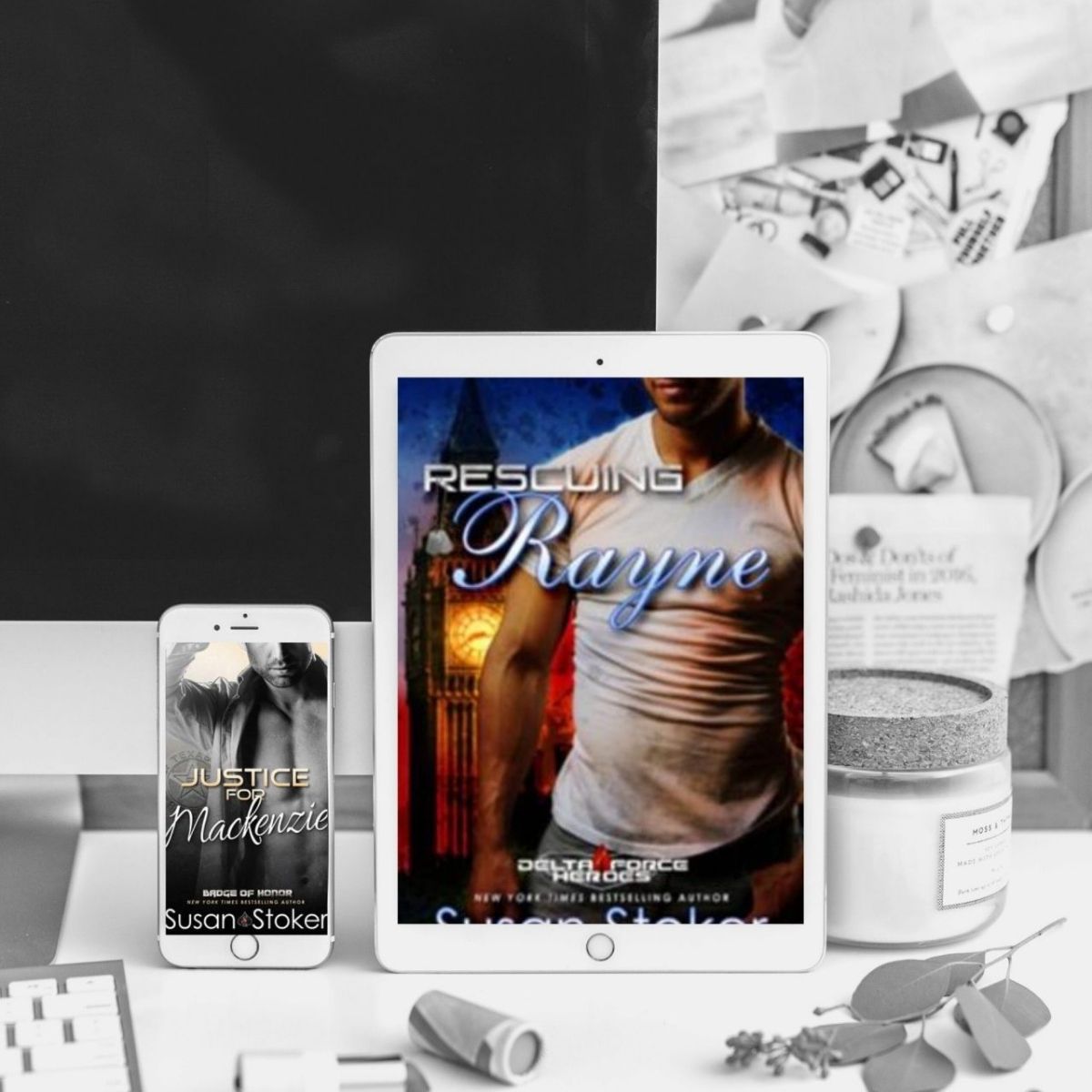 It’s the beginning of a new month which means time for our newest Featured Author! This month we are showcasing Susan Stoker. I am a huge fan of hers and will reread her books pretty often throughout the year. She writes some of the best heroes ever. At least in my opinion she does.

My three favorite series are her SEAL of Protection, Badge of Honor: Texas Heroes, and Delta Force Heroes. although all of her books and series are amazing. Each series has a number of books in them as well and I will of course be reviewing some of my favorites throughout the month for you.

She’d dreamed about seeing her one-night stand again, but had no idea they’d meet in a life and death situation.

As a flight attendant, Rayne Jackson is used to cancellations, but she never dreamed her latest would lead to a whirlwind tour of London with a handsome stranger…or a life-altering night in his bed. One evening is all the enigmatic man can give her, and Rayne greedily takes it, despite suspecting it will never be enough.

Heading home after another extreme mission, Keane “Ghost” Bryson hadn’t planned to seduce someone during his layover, but Rayne is too sweet to resist. Being a Delta Force member means lying to protect his identity, which is unfortunate, considering Rayne seems made for Ghost, right down to the tattoo on her back. For the first time in his life, regret fills him as he slips away the following morning.

Both are shocked when, months later, they meet again–under the worst possible circumstances. Seems fate has given them a second chance…if they can survive the terrorist situation they’re in. If Rayne can forgive Ghost his lies. And if Ghost can trust Rayne to be strong enough to endure the secrets and uncertainty that come with loving a Delta Force soldier.

** Rescuing Rayne is the 1st book in the Delta Force Heroes Series. Each book is a stand-alone, with no cliffhanger endings.

Mack blinked, hoping she’d be able to see something…anything, but she remained as blind as she’d been since she’d first woken up. She struggled desperately to hold the scream inside.

A member of the famed Texas Rangers, Daxton Chambers has dealt with more than his share of depravity. But the Lone Star Reaper takes evil to a whole new level, kidnapping and burying women alive. It’s Dax’s job to help keep San Antonio safe, but even with help from friends in various law enforcement agencies, the killer remains two steps ahead. It’s hardly the ideal time for a relationship, but Mackenzie Morgan is too luscious to resist. Dax wants her–which makes her an instant target for his newfound enemy.

When the Reaper gets personal, it will take every ounce of Daxton’s considerable skill and training to keep Mack alive. ​

​How far will one man go to save the life of a stranger?
More importantly to Caroline… will he do it twice?

Matthew “Wolf” Steel hated flying commercial.  As a Navy SEAL, he didn’t have to do it very often. Luck was on his side today, though. The woman with the aisle seat was willing to switch seats with him. Settling in and hoping for a relaxing flight, Wolf was pleasantly surprised by the good conversation and sense of humor of his seatmate as they flew 36,000 feet over the countryside.

When Caroline boarded the plane to Virginia to move across the country for her new job, she couldn’t believe her luck to be seated next to the hottest guy she’d ever laid eyes on.  She knew he’d never be interested in talking to her if he hadn’t been trapped in the seat next to her, but he was easy to talk to and it was a nice way to spend a long plane ride.

Neither Wolf nor Caroline were prepared for a terrorist hijacking of their plane, but if Caroline thought that would be the last time she’d see, or need, Wolf, she’d be sorely mistaken.

The three books about are the first books in each of the series that I love the most from Susan Stoker and s I said you will be seeing more from those series throughout the month. Now take the time to enter the giveaway below and maybe connect with Susan Stoker on social media.

New York Times, USA Today, #1 Amazon Bestseller, and Wall Street Journal Bestselling Author, Susan Stoker has a heart as big as the state of Tennessee where she lives, but this all American girl has also spent the last eighteen years living in Missouri, California, Colorado, Indiana, and Texas. She’s married to a retired Army man (and current firefighter/EMT) who now gets to follow her around the country. She debuted her first series in 2014 and quickly followed that up with the SEAL of Protection Series, which solidified her love of writing and creating stories readers can get lost in.