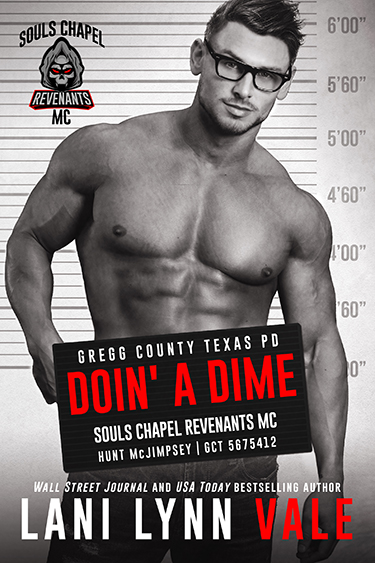 The moment that Wyett Villin read the ad on her local community’s page, she knew that it would be perfect. It didn’t matter how big the house was, what kinds of animals she had to take care of, or what the compensation was. She didn’t give a flip as long as it got her out of her childhood home and away from the person that she despised the most.

Only, she had no clue that by accepting the position, she would be agreeing to watch over the mini-mansion and two large dogs of Hunt McJimpsey, computer hacker extraordinaire, sexy nerd, and convicted felon of Souls Chapel, Texas.

She’d meant to make her life easier, not complicate it more.

Hunt McJimpsey was careful. He knew exactly what he was doing and practically planned every single step that he took to make sure that he always had his tracks covered.

But one single mistake costs him five years of his life, and if he’s going to go down for the crime, he might as well make it spectacular.

Three years into his prison sentence, he’s a changed man, and definitely not for the better.

He’s harder, angrier, and even more brilliant and conniving than before he went in.

He thinks that by keeping up with his dogs’ babysitter, his property caretaker, and reluctant wife, that he’s only doing his due diligence as a responsible person. Only, what starts out as curiosity for his property turns into genuine like for the woman that is caring for what means the most to him.

When an opportunity to get out of the hellhole known as prison arises and the only thing he has to do is join a motorcycle club and sign some of his free time away to help those less fortunate, he jumps at the chance.

I’m going to say, I knew I would like this book but I honestly thought it was just one I would enjoy before I got to the ones I really want to read about; Sin, Bruno, and Laric who all sound so interesting. What I got from this one was Wyett and Hunt who blew me away. I didn’t expect them to be so awesome!

Hunt is the resident Hacker and we saw in a previous book and series for a moment or two. He is the type of hacker that stands up for the little guy. For example going to prison for helping get back the money a large company has taken away from seniors. He made sure they knew who had done it. While he is in prison he needs someone to take care of his home and his dogs so he takes out an ad that Wyett answers.

They marry quietly and he heads off to the big house while Wyett moves into his home and lives her life. Over the time he is in prison they slowly begin to get to know one another during Wyett’s monthly visits. The Lynn gets Hunt out of prison early since he needs his help. Once he is out him and Wyett can focus on their marriage and their future.

As I said they were an unexpected wonderful surprise. They are perfect together although their families are both horrors! I’m not even kidding. I will said I would have loved to see Hunt’s family really get theirs at some point. Also there was a prison guard who was on Hunt’s “hate” list that I would have loved to see get his just desserts as well.

I love how each book gives us a little more of the other guys who will be coming up in future books. Without giving anything away there is a bathroom scene while everyone is camping that had me laughing out loud. I don’t want to say more but trust me when I say you’re going to expect one thing but will end up almost falling out of your chair laughing so hard. Poor Sin!

Author @rayvnsalvador has revealed the cover for M

Author @laramie_briscoe has revealed the cover for

Author @authorandiburns has revealed the cover for

Forbidden Obsession by @jaowenby1 is now LIVE! Do