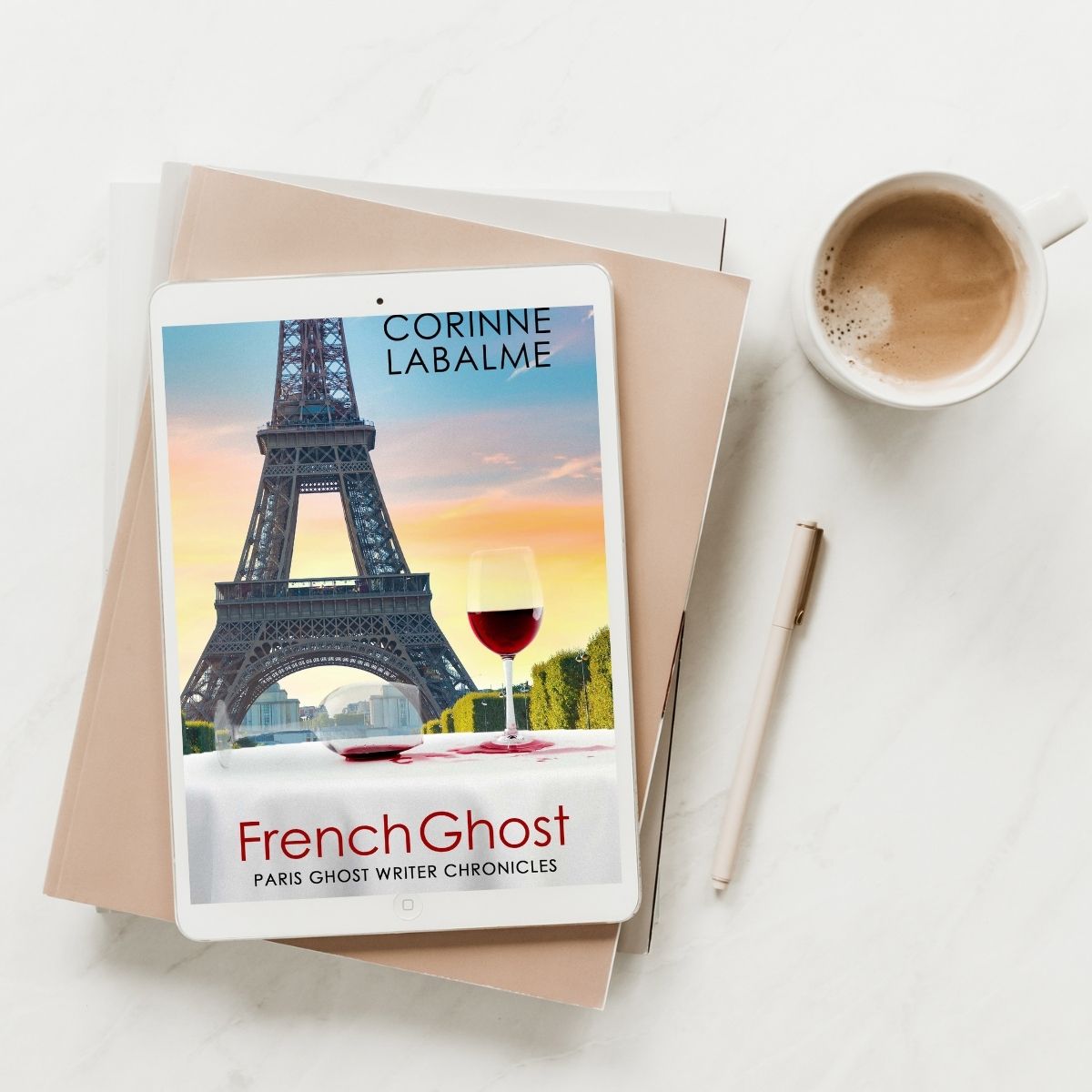 Today I have an amazing character interview for y’all from Carlos who is a character French Ghost by Corrine LaBalme. it is a cozy mystery book that I am certain yall with love. Take a moment to get to know Carlos adn find out more about the book. Not to mention there is a giveaway to enter.

Ghost-writer Melody Layne is stranded in Paris when the over-sexed but unloved French movie star who hired her to produce his memoir accidentally drowns before the interviews begin. It’s a major financial relief when his enigmatic Spanish son re-hires her, but the seductive Carlos Ortega is strangely silent about his reasons for funding a feel-good bio about a father that he clearly despised. There’s enough amour in the air for Melody to ignore this apparent paradox… at least until she uncovers a hidden cache of death threats addressed to the actor. For the French police, the sexy, secretive Spaniard – and sole heir to the actor’s immense fortune – is suddenly a prime murder suspect. Can Melody’s research into the Ghosts of Carlos-Past be enough to save her lover from prison?

Gracias, señorita, for your kind invitation to visit you at Storied Conversation.

I am, of course, Carlos Ortega. I am the Romantic Hero of FRENCH GHOST, but I am not always convinced that I get  – como se dice? – a fair shaking from this book.

Black hair, flashing eyes, white teeth… enough of all that! Yes, it is flattering that the author always insists that I am ‘very hot’ in my looks. However, she pays more attention to my hairstyle and physique than to the fact that I am a professor of Medieval History at the University of Madrid.  Rita, I want you to know that I have a distinguished career.  I do NOT like to be treated as an object of sex!

Unfortunately, the story of FRENCH GHOST does not portray me in my best philosophical light either. As a crusader for economic equality, it was very troubling to inherit a vast fortune from the man who abandoned my mother and myself to poverty. And unfortunately, I needed that money, for reasons of which I was forced to be very discreet. I had to take some secret and desperate measures for the greater good.

And that is precisely why Melody Layne, the woman I love with all my heart, finds fault with me. Melody always wants to know the ‘whole truth’ about every single thing! She seems to believe that the ‘truth will set her free’. Poor girl… if I have learned anything in life, it is that truth is best-served on a ‘need-to-know’ basis. I shall set the record straight in Book II.

My other quibble with FRENCH GHOST is that it always takes place in France. What a bore! Who would drink Château Margaux if there was decent Rioja on the wine list? Madrid is much more elegant than Paris and I hope that the geographic action will shift farther south in the next volume.

I am so thankful that Carlos was able to stop by and introduce himself to us today. It has made my day but lets read about Melody’s first meeting with him.

“You never met him?” His eyes brightened and the 100,000-volt smile that followed was totally worth waiting for.  “Naturally, I assumed … but if you never met my father, you’re a very lucky woman.”

His cell phone chimed but he ignored it. “Please tell me about this book. Who have you interviewed so far?”

He raised an eyebrow quizzically. “Who were you planning to interview?

“¿Estas loca?” The smile disappeared and he pushed his chair back defensively, as if my brand of crazy might be contagious. “You intended to write an entire biography about a public figure without doing any research at all?”

“It wasn’t a biography, it was a” I tried to keep the testiness out of my voice.  It didn’t help that I agreed with him. Perfectly innocent trees would have perished for a hard-cover manifesto that portrayed Charles-Henri Banville as a non-toxic lifeform

“That’s all there was in the contract.”

“Your contract, if I understand correctly, was taking the lies that man told as the truth? If I knew another writer…” He paused. “Unfortunately, time is short. My lawyers will draw up the new contract and send it to you.”

He didn’t ask me if I wanted the job but since I did, I saw no reason to make a fuss.  He reached for the bill just as I slapped my voice recorder down on the table.

“You want research?” I asked. “Let’s get started.”

My first jobs after college (incredibly useful art history degree) were in the New York fashion industry (modeling, working for designers). When I gave up on my Greenwich Village walk-up (after realizing that I couldn’t bear to smoosh the cockroaches in my shower because they were a ‘family’), I cut out to Paris where I became Fashion Editor for the English language magazine PASSION.

The cinema figures in FRENCH GHOST are loosely based on stars I’ve interviewed (and been groped by); the restaurateurs in Book 2 (FRENCH TOAST) are drawn from the lovely, often impractical, chefs I met through LA BELLE FRANCE.

I suspect that Book 3 will toss Melody Layne into the cut-throat Paris fashion scene. May the Gods of Ghosting have mercy on her soul…