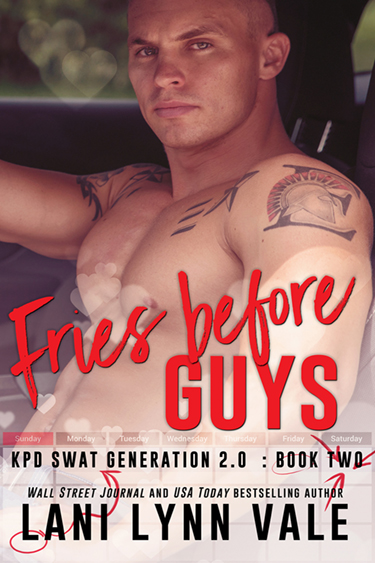 Sometimes people come into a person’s life and make their heart skip a beat.

Those people are called cops.

Well, one cop in particular.

A SWAT officer for the Kilgore Police Department, to be specific.

The first time Avery Flynn saw Derek Roberts, she was photographing him for the first annual Kilgore Police Department SWAT calendar. He was leaned back in his squad car, shirtless, and giving her a smile that was completely between them. A smile that hinted at what he wanted to do to her later.

When she scrounges up the courage to ask him out after the photoshoot, he laughs in her face.

Well, screw you, too, Mr. February.

She was a mousy girl who dressed like a twelve-year-old girl. Her tight leggings, extra baggy Star Trek t-shirt denoting her a Klingon captain, and her surprisingly clean Chucks didn’t leave much of an impression.

Now, the outfit that she was in weeks after he rebuffed her? Yeah, now that caught his attention.

Too bad that happens when he’s trying to save her from what’s sure to be death thanks to an unhinged native Texan who’s convinced she was the reason he lost his last chance at a million dollars.

When he tries to save her, she tells him she’d rather take a cattle prod to the forehead than go anywhere with him.

We met both Derek and Avery in the first book and I will tell you I liked them then. Avery is the photographer of the calendar the SWAT guys did for charity. In fact, it is for her that they did the calendar. Life has thrown her a few tough breaks lately. Both of her parents (who were both police officers) died, she is still in high school and having some trouble with bullying, and she’s trying to make ends meet. There is so much more and that is just the tip of the iceberg with the issues poor Avery is having.

However, she is more than determined. She refuses to let it all get her down and puts herself out there by asking Derek out at the photoshoot they do. He of course laughs in her face which embarrasses her but she goes on with her life. The funny thing is that fate has other plans.

Derek actually does like Avery, regardless of what she thinks. Yes, she was looking a bit geeky and too much her age which is younger than him when she asked him out. She’s still in high school and that is one of the things that stops him. At least it does until it doesn’t anymore. He admires Avery for making her way and taking care of herself but gets frustrated that she won’t ask for help. The entire police department is at her back whether she wants them to be or not. When it becomes clear that someone is trying to kill Avery Derek is done letting his hangups about age in the way.

I loved this book. No, that is not a strong enough words! Lani Lynn Vale earned every single one of those five stars I gave her with this book. It is so full of emotion that I found myself laughing one minute and crying the next. I’m almost afraid to read the next book because how do you get better than this. Although I know that it will be a masterpiece in it’s own right.