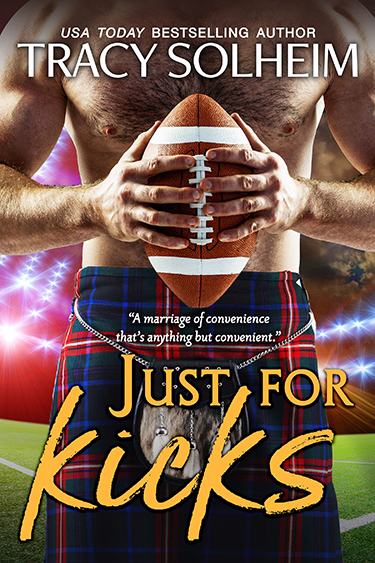 It was supposed to be just for kicks...

Andi Larsen learned early on there is no such thing as fairy godmothers. A childhood spent in foster care will do that to a girl. She’s working her way through night school and is on the cusp of establishing her own business without help from anyone, thank you very much. But when her deadbeat ex steals her identity, amassing a staggering debt in her name, her fairy godmother appears in the guise of a spunky, Fireball whisky-wielding septuagenarian. The older woman’s solution for Andi? Tie the knot with a kilt-wearing, moody jock whose legs look sexier in a skirt than hers do.

Declan Fletcher never intended to be a place-kicker for a professional football team. But fate had other plans. Exiled from his beloved Scotland a decade ago, Dex is now a superstar athlete known throughout the league as the “Man with the Million Dollar Leg.” But when a mix-up in his immigration paperwork threatens to send him home before the season begins, he’ll do anything to avoid deportation and facing his greatest mistake. Even if it means marrying a pink-haired waif of a lass with eyes that seem to see everything he’s determined to keep hidden.

A grumpy cat, nosy teammates, and a sizzling sexual attraction make their marriage of convenience anything but convenient.

This was a funny book and that is what drew me too it since I don’t really do sport romance most of the time. I made an exception for this one and I am glad that I did. Like I said it was funny.

Andi and Declan are great together. Although they are both a bit stubborn at times and Declan has a boat load of issues. Andi needs to pay off some bills that her scum of an ex decided to take out in her name. She has no idea what to do and when Mrs. Hilbert suggests she married her son’s client because he needs his visa dealt with quickly Andi’s not sure what to do.

Declan is all in once he makes up his mind to do it. He figures they can keep everything on the downlow and a few months they will both get what they want. Boy could he not be more wrong. I loved that Declan was more than your typically jock though. He’s smart and it shows.

Mrs. Hilbert was the best secondary character ever! She was a riot and I loved every single scene that she was in. She had so much spunk and I really hope she makes appearances in the future books as well.

Married.
The very word gave him the bloody shakes. A loving companion, a family, happiness. Those weren’t in the cards for him. Not after he’d taken all that away from Niall.
Too bad his agent’s wacky mother didn’t know that.
“Problem solved.” Mrs. Hilbert punctuated her declaration with a saucy wink.
Her companion, on the other hand, remained wide-eyed and mute. Blue eyes, the color of the cornflowers in his gran’s window boxes, studied him overtly. Potent arousal flickered within their depths before she quickly doused it. Not surprising. He was used to that look from women.
What did surprise him was the swift crackle of awareness that traveled up his spine when their gazes clashed. This woman was so far from his type it was almost laughable. Slim and petite, with a slender chin and pixie-like ears to go with her doe eyes, she was more like one of those wee highland fairies his little sister was always searching for in the garden, right down to the pink hair pulled back in a loose ponytail.
“Actually,” Kurt was saying. “That’s not a bad idea. It could work.”
Dex opened his mouth to object, but the fairy beat him to it.
“Whoa, hold on just one minute.” She jumped from her seat. “I came in here for legal advice.” Those blue eyes grew even wider as her gaze frantically darted around the room. “Sure, my situation may be a little dire, but not dire enough to marry some dude who’s aged out of a boy band.”
Not dire enough to marry who? What the bloody hell did she mean by that? Someone needed to inform the little pixie that women had actually proposed to him, thank you very much. And what was this bullshit behind her ‘boy band’ insult?
“What did you just call me?” he demanded.
She gestured to his plaid. “Halloween is two months away, Jamie Fraser. If you’re not in a boy band, what’s up with the skirt?” Her eyebrows went up a fraction. “Unless you work at one of those strip clubs. In that case, no way am I marrying a man who spends more time getting waxed than I do.”
A low growl escaped the back of his throat as he took a step closer to her. “How many times do I have to tell you Sassenachs? It’s not a bloody skirt!”
“Fireworks already.” Mrs. Hilbert clapped her hands together with glee. “This is going to be one passionate marriage.”