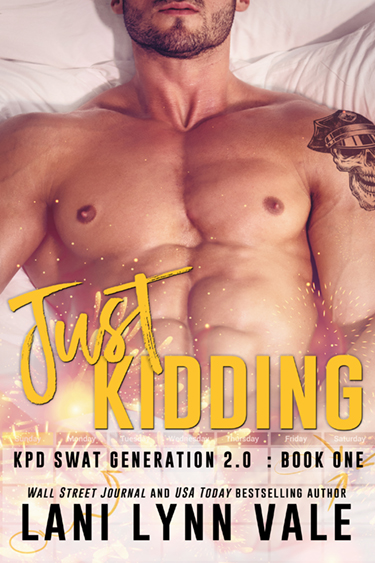 Now, every time Dax Tremaine walks around a corner, the women of Kilgore, Texas can’t help calling him Mr. January.

It goes from bad to worse when even on a SWAT call, the women won’t stay away.

***
It was the worst time of her life. Rowen Roberts had finally admitted to herself that the man she loved would never love her back. She was just fired from her job for violating client confidentiality, and to make matters worse, she’s held up at gunpoint in a convenience store where she only wanted some ice cream to help mask the pain.

The moment the gun is pressed to her forehead, she knows she has a decision to make. Follow the rules and maybe possibly live, or go down swinging where at least she can salvage just a little bit of her dignity.

And when Mr. January himself tells her to do what the gunman says, she’s had enough. Rowen has never really been a girl that does what she’s told. Mr. January won’t have to save her. She can dang well save herself.

Dax and Rowen are both characters we met as children in their parent’s books. I was waiting for Rowen’s story after the tease we got in her sister’s book. She was in love with her sister’s ex which was plain for anyone to see. So I was curious as to how all of that would play out. Especially since Dax ain’t the ex.

A lot happens in the first chapter of this book that sets it all up so well. Dax is certainly the kind of guy that you want on your side. Although being Mr. January has been more than a bit rough on him. Can I also say some of those women are a bit much with their requests? While Rowen is the character that you can easily see yourself as while reading. I love that. A character is perfect in my book if I can see myself in them. Let’s face it we all want to get lost in the lives of the characters we read. Being able to do that makes the book all the more enjoyable.

Once again Lani Lynn Vale has given us characters that do just that. Allow us to lose ourselves in their drama for a while. I enjoyed every minute of the entire book. Let me say I was so surprised over who the real crazy ended up being. Although there are several it could have easily been. Also the event that leads to begin searching for a possible crazy is just WOW! That sounds like something straight out of Lifetime and made me hurt when I read that. I know y’all are all going..What happened? You will have to read it for yourself. I don’t want to spoil anything and telling you the event would do just that. It’s a bit unexpected so it made all the better.