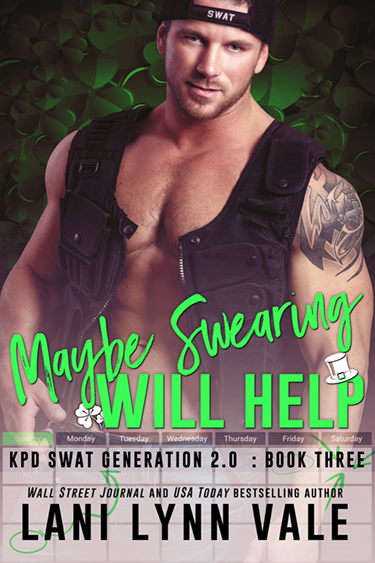 Ford Spurlock has known Ashe Trammel since they were babies.
He’s also done his level best to stay away from her because every time he gets to within five feet of her, they’re fighting like cats and dogs.
Ashe is the apple of her father’s eye. The motorcycle club princess that was never to be harmed in any way—or touched for that matter. And he’s always resented the fact that she could get away with things that he couldn’t. Things that she then blames on him and he always gets punished for.
Fast forward to adulthood, and Ashe is still off limits. Still driving him insane. Still…beautiful.
She never misses an opportunity to give him hell, either.
That has to be why he agrees to do a photoshoot for KPD SWAT that’ll benefit her charity even when he’d rather shoot himself in the foot with his duty weapon.
***
Ashe never thought he’d agree.
Honestly, she thought she’d ask him, he’d say no, and that’d be the end of it.
She never realized that she’d leave his photo up in her cubicle, and it’d be the last thing that she saw every night as she locked her office door.
When they were kids, Ford used to be that boy that threw dirt at her and pulled her hair.
Now, he’s the same Ford Spurlock, only a whole lot sexier. And a lot harder to say no to.
When he challenges her to one date, she has no other recourse but to agree.
What she didn’t agree to was falling in love with Mr. March. Or wanting to give him everything she had to give.

Ashe and Ford grew up together. Their fathers are members of the Dixie Wardens MC and friends. They have always had an attraction they fought with hate and dares. Although when the chips were down they were always right there for one another. Their parents say they were horrible children. Now as adults they still appear to go together like oil and water. Yet, that chemistry is hotter than ever. A dare and a bet changes the course of their relationship. What was once hate is finally something more they will admit.

I always say how much I love the characters that Lani Lynn Vale writes. That is true, her characters have that unique quality of coming across the pages as real people. Her books never feel like fiction as much as they feel like real life. That could not be truer here. It would have been so easier for Ford and Ashe to continue on in their hate of one another. They would have eventually found other people and maybe even had been happy. Yet they decided that as much as they get on one another’s nerves at times they have a love worth fighting for. We see at different times just how much they have truly always cared about each other.

We see two people who fit so perfectly together that their differences don’t matter as much. They can easily call one another on their crap and have separate interest without feeling guilty. They seem to fall into an easy relationship although I think it is more they simply accept what was always under the surface.

I will say I almost gave this book only four stars. I KNOW! I love Lani Lynn Vale and all of her books are so great. However, this one left me with some questions. She did make a note saying she knew there would be questions and they would be cleared up in future books. Now, that does NOT mean it is a cliff hangar. It is not. There are just a couple of questions that need to be answered but I can totally see why they would need to be answered in future books. Now if that isn’t critic enough for you then let me say the Fun Fact at the beginning of chapter seven made me laugh so hard. I had to call my brother and share that with him. This book is a MUST read!