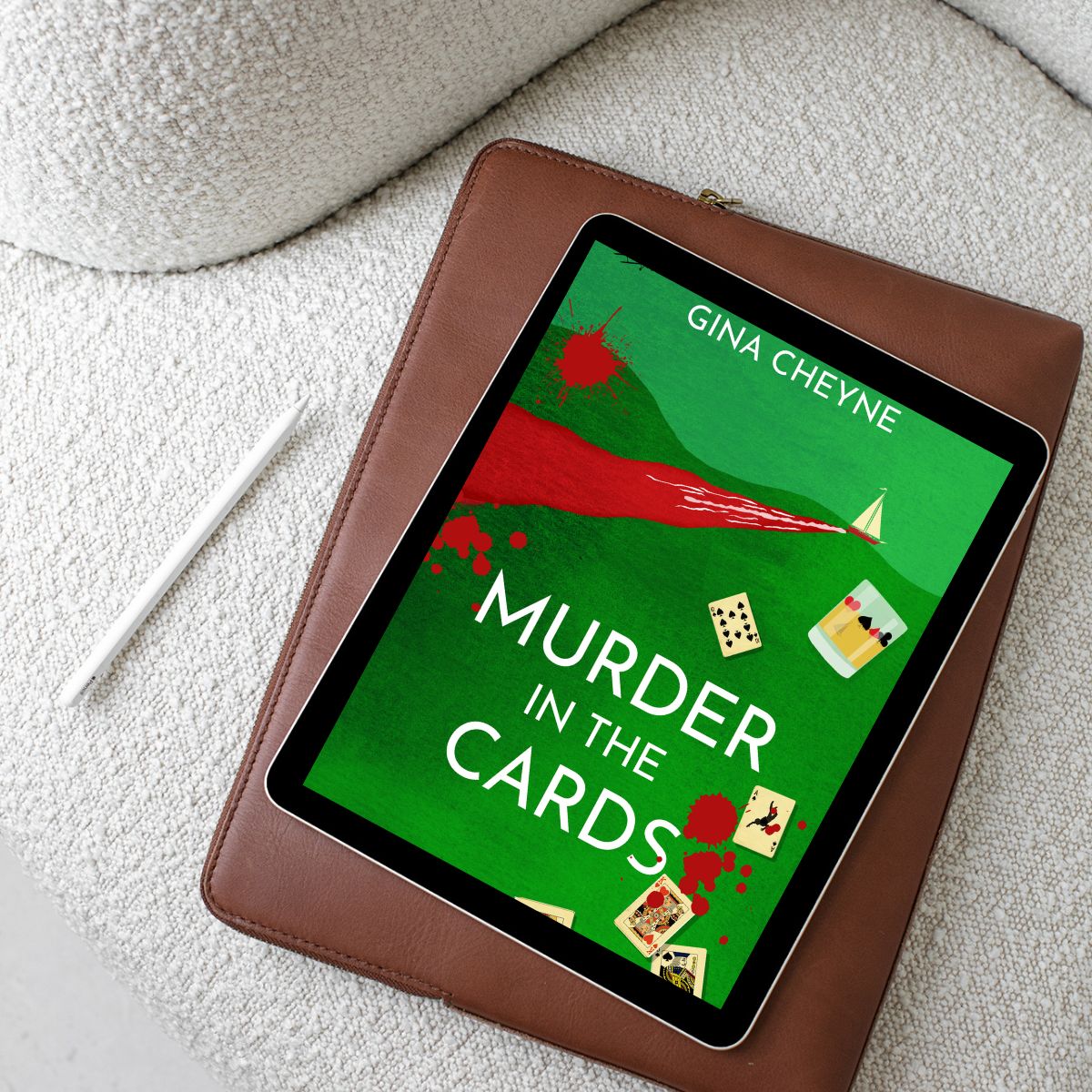 I have an excerpt for y’all today from Murder in the Cards by Gina Cheyne. It’s a good excerpt too. One that will make you want to head over and buy the book. If you are looking for a new mystery to read then I highly recommend this one.

Death is the rule, survival the exception in 1960s Soho bridge circles

When the SeeMs Agency detectives play bridge online in 2020, they don’t expect their opponent to die during the game and yet a post-mortem the next day proves Brian Deliverer was dead halfway through the night. Can a dead man play bridge?

Employed by Brian’s daughter Karen to investigate his death, the team are led back to a notorious 1920s murder and to a missing teenager from a Sussex village in the 1960s.

Should they tell his daughter the terrible truth behind her father’s death even if it costs her everything?

It is 1973, and Jack, an Irishman, has run a gay high stakes gambling club in London since the early 196s, but times are changing and even though the law against homosexuality has been revoked, Jack is still being hassled by her majesty’s magistrates. Here he is thinking of selling the club. Fran is his transvestite girlfriend, and Bev her business partner. Together they fleece punters for high stakes by cheating at bridge.

When Jack entered the club, the rozzers were already in. Two policemen were sitting at the bar drinking coca cola.

‘Jeezus!’ he muttered to Clinton. ‘It’s been legal these six years, and still those orderly daughters find any reason to do us over. What the flatties doing here?’

Clinton shrugged. ‘The big one there says they’re just after having a drink and we’re not to see them as betty bracelets, but as a couple of friends sitting at the bar enjoying the music.’

‘To be sure! We all drag up the uniform when sipping with friends. Corrupt bastards. Lucky we’re not black as well as queer or they’d be fitting us up big time. They hopin’ for an auntie for themselves?’

Last year, Fran had made him take part in the first Gay Pride march, and the police behaviour had intensified Jack’s lily-love. Now, seeing them sitting in his bar as bold as Jesus was enough to frizz up the hackles along his neck.

Fran herself had disappeared shortly after the march. Bev’d had to make do with Carile and Scarlet or any other willing aspra. He hadn’t seen the silly bint since; she’d vapourised like a will-o’-the-wisp, but she’d be back. She always was.

He spun a mat along the bar. It knocked into the nearest policeman’s glass and spilt some of the beer. ‘I wouldn’t trust a lily further than I could spit,’ he said to Clinton loudly enough for the policemen to hear.

The barman took over the new glass and the man poured most of the contents of his old glass into the new one, leaving a small amount in the old glass. He pushed it over to Clinton.

‘Here’s a tip for your boss,’ said the policeman, and his smile would have made a mongoose scuttle away. ‘You can tell him I saw him and his pretty girlfriend at the parade. Nice couple they made, didn’t they, Jimmy? I was quite jealous.’

He leered at Clinton, never looking at Jack.

Jack forced himself to turn his back and walked away, but the policeman’s action had hardened a thought that had been long growing in his mind.

Over the other side of the room, Bev’s gold rings reflected the light. Jack watched the golden gleam, concentrating his mind. The club was raking in the dosh, and their name was good – outside the lily pad, that was, but even those nadas in the vada only dared tread so far.

Two new omnis were playing bridge at Bev’s table and tonight her partner was Fran. Jack’s already thumping heart leapt in a different direction. Not that he cared. God knows he wasn’t one to go soppy over a doxie, any more than he’d lose his cool over a couple of bent rozzers.

He sauntered over. She looked up and their eyes met. She lowered hers immediately, but she didn’t fool him. He saw the light dancing in those green eyes. Little tart was glad to see him too. For one moment he imagined stripping off all her clothes, there and then, and bending her over the card table.

He laughed, and both omnis looked up curiously. Neither girl’s concentration left the cards.

Fran smiled down at her cards. ‘Feels like I never left.’

Jack sucked his breath through his teeth. Something registered in his mind; not sure, but he knew that little girl now. If she said ‘Feels like I never left’ then she hadn’t. Could she really be that good an actress?

‘You come in for the kill?’ asked Fran softly, keeping her eyes on the cards.

He looked down at her cards. Fran was Mr Bennett of the infamous bridge game. This wasn’t the first time she and Bev had tricked their omnis with that little match. Fran licked her lips.

Jack stared at the cards in her hands. He physically felt her longing. ‘You pushing me, little girl?’

He felt Bev’s hard stare from over the other side of the table.

‘Want to play, tonight? At Muriel’s?’ Fran asked, too quietly for anyone but him to hear.

‘I’ll get my gun,’ he said, and she nearly fell off her stool holding in her laughter.

As a child, Gina’s parents hated travelling and never went further than Jersey. As a result she became travel-addicted and spent the year after university bumming around SE Asia, China and Australia, where she worked in a racing stables in Pinjarra, South of Perth. After getting stuck in black sand in the Ute one time too many (and getting a tractor and trailer caught in a tree) she was relegated to horse-riding work only. After her horse bolted down the sand, straining a fetlock and falling in the sea, she was further relegated to swimming the horses only in the pool. It was with some relief the racehorse stables posted her off on the train into eastern Australia to work in a vineyard… after all what could go wrong there?

For a few years Gina was a Wingwalking pilot, flying, amongst others, her 64-year-old mother standing on the wing to raise money for a cancer charity. She was also a helicopter instructor and examiner and took part in the World Helicopter Championships in Russia and the USA.

Under the name Georgina Hunter-Jones she has written illustrated children’s books such as The Twerple who had Too Many Brains, and Nola the Rhinoceros loves Mathematics.