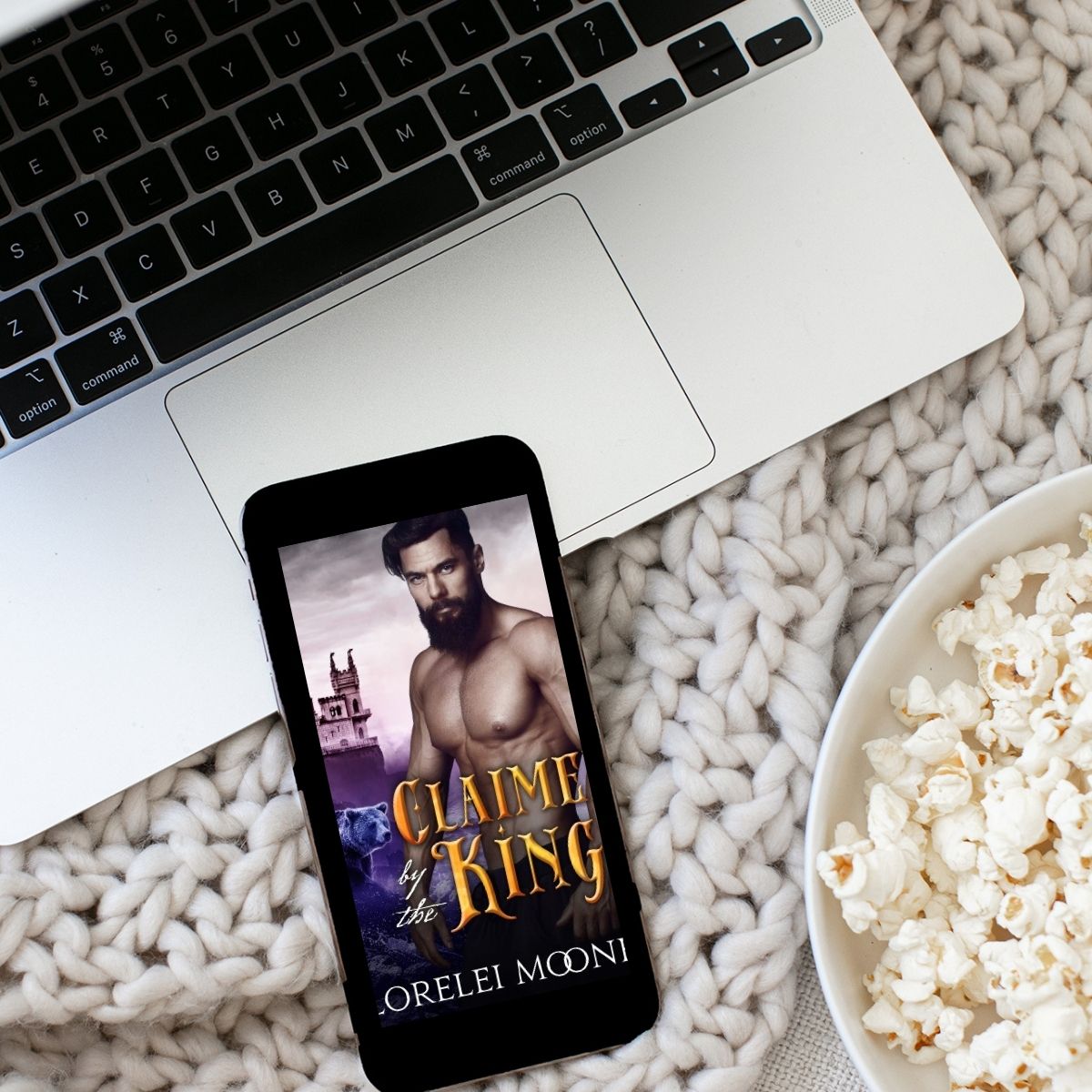 Have you read Claimed by the King yet? Take a look at it below and find out why you need ot get this book today!

CLAIMED BY THE KING

Abandoned by her people, a young woman was being sent to her doom.

Kelly was going to be a prisoner; a slave. At least that’s what she thought as she waited for the mysterious giants that lived on the Black Isles to claim her. A human sacrifice, once every eight years. That’s what it took to keep mankind safe from these savages.

The human would ensure the survival of his bloodline. Whether he liked it or not.

Broc’s reign as King of the Black Isles had lasted seven years already. That was a long time to go without a queen and therefore, an heir. He knew what he had to do; to claim the human offering and make her his own.

When they met, it changed everything. A glimmer of hope, even of love, in unexpected places. But life on the Black Isles was far from simple. And there were powerful secrets, yet to be uncovered, that could change everything yet again.

Claimed by the King is the first in Lorelei Moone’s brand new fantasy romance series, Shifters of Black Isle. Shifters, magic and relatable characters; set in a mysterious, distant land, where anything seems possible, and yet all its inhabitants hold dear could be destroyed in an instant.

Broc held on to his sword tightly, the leather of his gloves creaking loudly under his powerful grip. He could hear it, despite the screeching winds and waves battering the wooden boat.

Although they were at peace with the men of West Hythe, one could never be too careful.

Every eight years, the humans had held up their end of the bargain, though. They had left a suitable young woman behind on the shore near their villages, and nobody had stayed behind to watch the giants’ arrival or possibly interfere.

In any case, the timing of this exchange was carefully thought out: nights on the Northern Sea were always foggy this time of year. If anyone had stayed behind, they would have to be very nearby indeed to be able to see a thing.
Looking around the wooden longship, Broc could see a lot of his people were much more excited about tonight’s festivities than he was. Their chatter was even louder than the rhythmic drum setting the speed for the rowers.
He hated to have to do this; to tear a young girl away from the only life she had known and take her to the Isles against her will. Sadly there was no other way to ensure the survival of their bloodline; without this tradition, Broc’s people might become even extinct.
After the Great War, many of their number had fallen. Outnumbered, and overpowered by the sorcerers who had sided with humankind, their kind had retreated to the Black Isles and left the mainland to be ruled by men. However, their reduced numbers had meant that they would need fresh blood to replenish their line.

One can only interbreed for so long before things start to go wrong and madness sets in.

He had seen it happen with his own two eyes.
If he squinted, he could just about see the shore through the dense fog. Luckily, his people had a lot better vision than the humans, meaning they could safely navigate the treacherous waters around Hythe Bay to collect the latest addition to their clan.
Broc had first pick, as was tradition.

There was no way he could get out of it either. He’d been king of the Black Mountain and surrounding isles for seven years, ever since his father had sailed off into the next realm.

It was time to start thinking about an heir, whether he liked it or not.
“Wonder what this one’s going to be like,” Rhea next to him remarked, her tone sharp with spite. Her comment was a reference to the trouble they’d had last time. Transitions could be difficult.
He glanced over at the strong young princess, his cousin twice removed, as she stared darkly over the water leading to the coast. It was obvious she’d wanted to be his queen, but it wasn’t meant to be. A union between them would have been forbidden, in any case.

They were too closely related. And they even shared the same animal form.

Broc had always aimed to be a fair ruler; he could not make an exception to such an important rule for himself. The consequences would be too severe; the islanders’ mating rules existed for a reason.
A king must do everything within his power to ensure a healthy heir is produced. In his case this had meant taking a human as his bride instead of the relative he’d grown up with. Although he hadn’t made his intentions about this Reaping public yet, Rhea had guessed. And she had made it a point to openly express her displeasure.
Shortly before the keel of their ship threatened to hit ground, Teaq, Broc’s half-brother and commander of the Black Isle armies, gave the order to steady the oars and drop anchor. Impeccable timing as always.

Broc observed as Rhea and Teaq shared a dark look. It was obvious they each disapproved of tonight’s goings on for their own reasons.
“There she is,” Teaq spat, unable to disguise his disgust.

His tone rubbed Broc the wrong way. It wasn’t the girl’s fault she had been sent to them as an offering in the Reaping. And what exactly had sparked Teaq’s dislike of human females, Broc had not yet understood.
“Remember, she will be shown the respect deserving of any citizen of the Black Isles,” Broc spoke in a low, determined tone.

Teaq’s jaw tensed, but he did not respond.
“Yes, my king.” Rhea averted her eyes from the shore and retreated to the back of the ship to stand watch over the waters behind them. As commander of the royal guard, it was her duty to ensure Broc wasn’t ambushed.

“Just remember what we discussed,” Teaq grumbled. “These are troubled times. The last thing we need is further complications within our own walls.”

When their father had conducted the last Reaping ritual, the girl had found it incredibly difficult to adjust to her new surroundings. For some time it was feared they’d lose her to madness, but thankfully she had recovered and integrated into their way of life some months later.

They’d instituted a new rule; the newcomer would not be fully introduced into their ways until she had obviously adjusted to her new circumstances. Teaq had wanted for things to go much further; including keeping the girl on house arrest for the first month; something Broc had vehemently disagreed with. As king, the final decision had obviously been his.

They would keep her in the dark, figuratively, but she would be as free as any of the other inhabitants of the Black Isles. At least as far as her movements within the castle on Black Mountain were concerned.

Still, it was for the best to be cautious. She did not need to know the truth about everything from the start. Humans did not handle it well when their views of the world were challenged.
“I wish you’d reconsider and at least let me put a watch on her. We do not know of her intentions,” Teaq added.

Broc scoffed. Her intentions. This was just going to be some unfortunate girl who thought she was being sent to her death.

Lately Teaq had grown more and more paranoid. They had enough to worry about with the threats from further out at sea. As long as the humans continued to hold up their end of the truce, their peace would hold.

“Alright. That’s enough of that,” Broc said. “We’ve laid down the rules already. But I won’t have her treated as a prisoner under my rule. Let’s get on with what we came here to do.”

The many dozen or so soldiers onboard held their heads bowed as Broc strode past towards the port beam, which was by now perfectly lined up with the shoreline.
Teaq signaled the all clear and jumped over the side, landing squarely on his feet in the waist-deep water. Broc followed.

They were back on track, but this wasn’t the end of that particular discussion; Broc was certain of it. Teaq’s stubbornness was in part because as the older brother he’d always expected to get first right to the throne. He wasn’t good at following orders.

Too bad for him that their father, the late King Ryk, hadn’t seen it that way. They had fought it out just like in the old days. Hand-to-hand combat.

Obviously, it was Broc’s victory that had earned him the honor of ruling over the Black Isles. Whether Teaq liked it or not.

The salty water of the Northern Sea was close to freezing, but Broc—as well as the rest of his clan—were used to it. They were much better suited to cold temperatures than humans were.

Despite the saltiness in the air, Broc could smell the human from across the stony beach. Her scent was sweet, almost floral, with a hint of something sharp. Fear, perhaps.

His inner beast stirred. A new sort of sensation came over him. Although he hadn’t even seen her yet, he knew how this Reaping was going to end. She would be his. And she would give him his much awaited heir. It was a bittersweet prospect.

The poor girl had no idea what was in store for her.