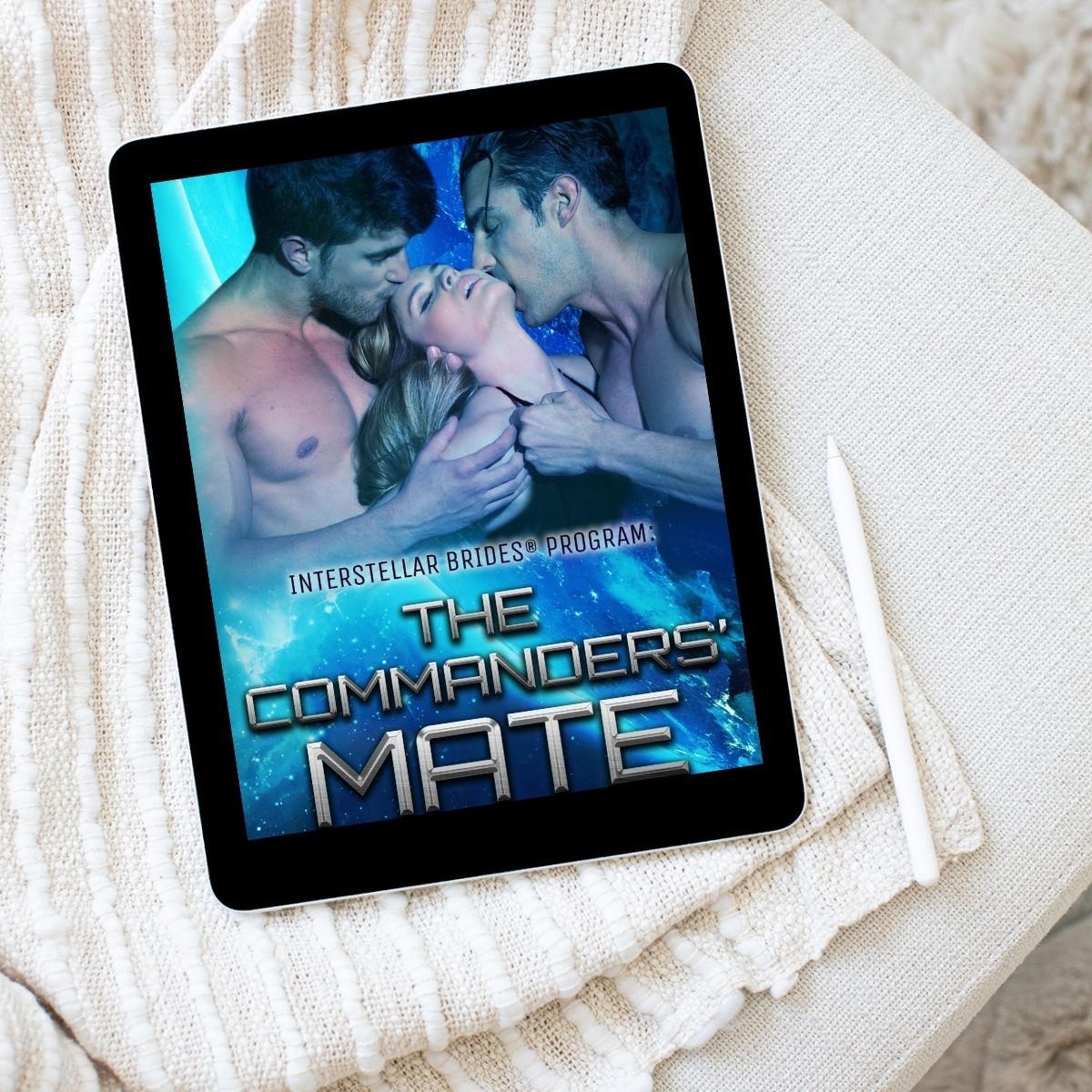 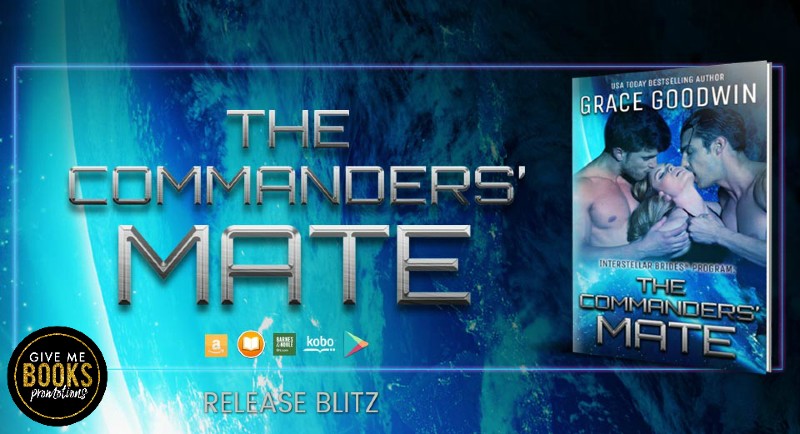 I am so excited about this particular release! I am huge Grace Goodwin fan and I lover her Interstellar Brides series! While this one is about Prillon warriors and a human my favorite is the Altan and their beast within! Trust me you have to read the series to get it. However, since Commander Karter is finally getting his story with this release I have been up since midnight one-clicking and reading away.

Commander Karter is a Prillon Warrior. His first duty is to protect his people, to defend the Coalition worlds from a fate too terrible to comprehend. Battle is his life. His heart. He fights. He has never once been selfish enough to believe he deserved an Interstellar Bride. Until he’s matched at the worst possible time.

Astronomer Erica Roberts has always dreamed of seeing the stars. Volunteering as an Interstellar Bride is a win-win, not only will she be able to see the galaxy, but she’s more than ready to take on the two alien warriors she’s been promised. She’s all in. But when she transports directly into the aftermath of a battle, she quickly learns this won’t be an easy match. Her two commanders are torn between battling the Hive and battling their need for her.

If a new Hive weapon can destroy a Coalition battlegroup in the space of a single heartbeat, what will it do to Commander Karter’s match? And how is he and his second supposed to keep their mate safe if they can’t even save themselves?​

“Ms. Roberts, your testing is complete.”

That voice. Damn it, I knew that voice, but I didn’t want to come back. I wanted to stay with my mates. “My mates.” I hated the choking pain I heard in my own voice, but I couldn’t stop the protest. No one had ever touched me like that, made me feel like I was his, no their, world.

“All in good time, Ms. Roberts.” That matter-of-fact tone brought me fully back to reality, and I recognized the firm press of the testing chair beneath me. This place, it was like going to the dentist, a necessary evil. But this was no ordinary dentist’s chair. I was locked down, wrists, waist and ankles secured with padded buckles like I was some kind of dangerous criminal.

But then, sometimes the women in this chair were criminals. Just not me. I was a volunteer. I had nothing left on this rock called Earth. After I’d caught my ex-fiancé sleeping with my roommate, I’d dumped his ass and taken the new job at the observatory on the big island of Hawaii, thinking the stars I loved so much would distract me from what a low-life loser I’d almost married.

Instead, those small twinkling lights had called to me. I had been staring up at the stars for almost as long as I could remember, the obsession never leaving me, not even when I graduated after finishing my Masters and started my career in astronomy. Fifteen years ago, when I’d gotten my first telescope for my birthday, actually going out there hadn’t been an option. There was no space travel. No aliens. Nothing. We’d been alone in the universe.

But now? Now we humans knew the truth. Earth was one of almost three hundred planets being protected by the Interstellar Coalition Fleet. Without the Coalition, Earth would fall prey to the Hive, a scary-as-fuck race of freakish biosynthetic cyborgs that consumed new races and new planets to feed their never-ending need to expand. Grow. Conquer.

They reminded me of the Borg from Star Trek, but I kept that opinion to myself at the office. Hell, everywhere. Half of the people thought the whole thing was a hoax and conspiracy to convince humanity to send sacrificial lambs up into space for freakish alien breeding programs, or as expendable soldiers for nothing but suicide missions.

I didn’t believe the conspiracy theory websites. Not just because my mother was a NASA engineer and knew more about what was going on than most, but because there were a handful of warriors who’d come home after serving their two years. I’d made a point of tracking them down, reading their interviews, visiting as many as I could, as many as would talk to me. I wanted to know about the other worlds. What sort of animals roamed these unknown planets? What type of plants and terrain would I see? What did the aliens who populated those worlds look like? What did they eat? What were their customs? I wanted to know everything.

But all they ever talked about was war. PTSD on a massive scale. Whatever was out there, it was bad. Those who would talk to me—once I used my own university credentials to convince them I was not a fanatic or an all-around crazy person—talked of little but the battlefields, and the enemy.

As terrifying as the Hive sounded, I wanted to know everything. But I wanted to know how the other Coalition races lived, not just how they died. War was war. It sucked. But what were all those alien warriors fighting to protect?

Guess I’d find out, assuming the testing had worked. I sure as hell hoped it had. I was not small, which my ex had taken great pleasure in pointing out as often as possible. I was tall to start with, as tall as a lot of men, and yes—I was carrying a bit of extra weight. But I loved my body. The softness of my stomach, my extra-large breasts. Skinny girls didn’t get the goods, and I had them in spades. Boobs. Ass. Boom-baby. I didn’t want to go home, back to work, back to my normal life. I would never be the same again, not after this. Not after them. The two mates in the dream. They weren’t mine, but still. Wow.

“Ms. Roberts? Can you hear me?” She sounded impatient now, the woman I could sense looming over me. She wasn’t mean, just… efficient. I wanted to linger in that magical place, stuffed full of two hard cocks and more love than I’d ever felt in my entire…

“Erica, do you need a doctor?”

Damn. “No. I’m fine.” I opened my eyes and blinked, taking in the testing room. Sweat coated my skin, the orgasm that had been just a dream lingered, my skin warm, my nipples hard, my heart racing.

But was it all about the sex?

On Earth, I couldn’t even find a man who wanted to have sex with me. Those who weren’t afraid of my height were freaked the fuck out by my…

“Erica, are you sure you’re all right?” Warden Egara asked, coming to stand before me. “You’re taking a bit longer than usual to come out of the testing phase.”

Testing phase? Was that what they called intense orgasms around here?

“Sorry, I just didn’t want to come back yet. It was just getting good.”

Grace Goodwin is a USA Today and international bestselling author of Sci-Fi & Paranormal romance. Grace believes all women should be treated like princesses, in the bedroom and out of it, and writes love stories where men know how to make their women feel pampered, protected and very well taken care of. Grace hates the snow, loves the mountains (yes, that’s a problem) and wishes she could simply download the stories out of her head instead of being forced to type them out. Grace lives in the western US and is a full-time writer, an avid romance reader and an admitted caffeine addict.