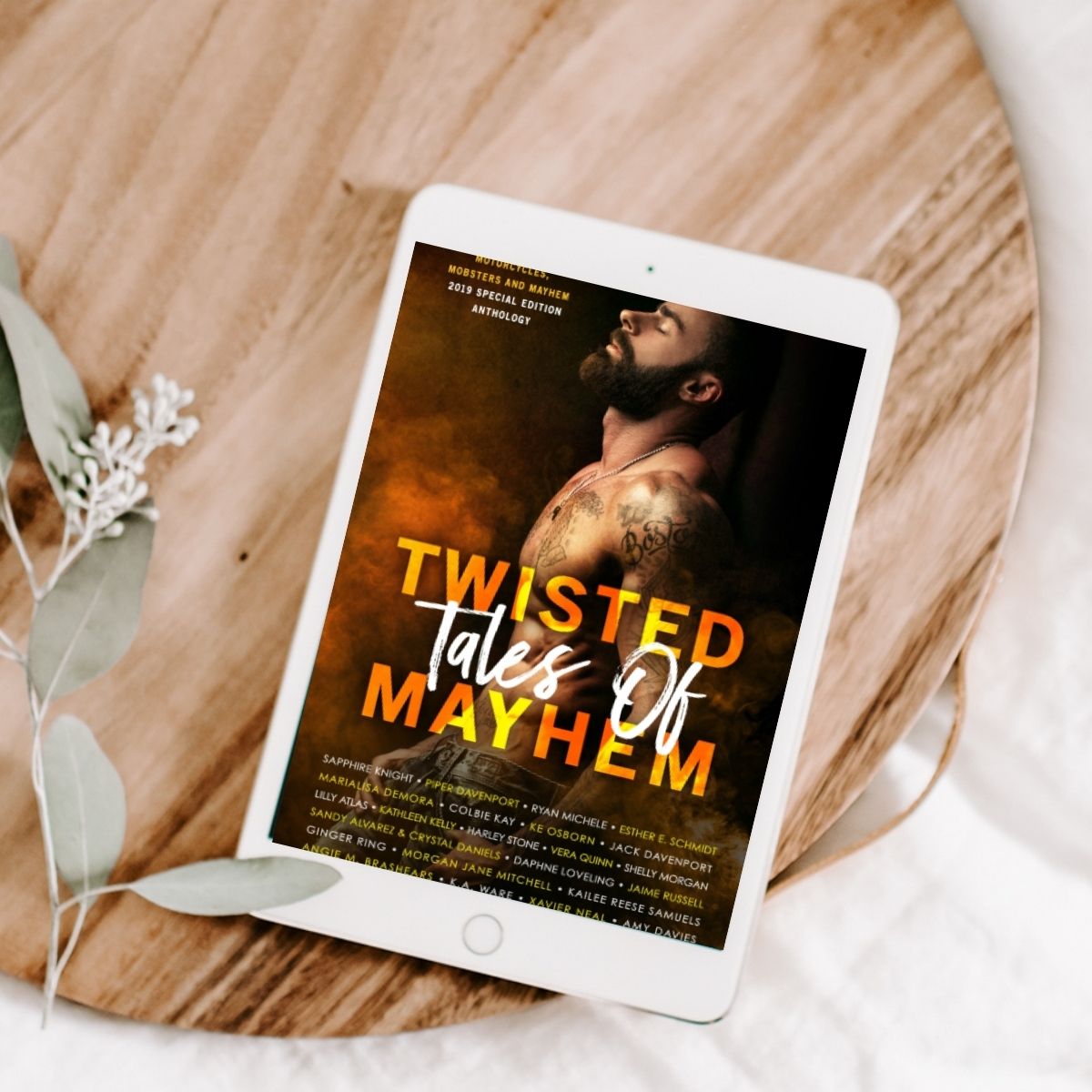 Net proceeds raised by the MMM19 anthology will be donated to the Patriot Guard Riders.

They’re a diverse group of riders from across the nation. They have an unwavering respect for America’s heroes including fallen military members, first responders, and honorably discharged Veterans. Their mission is to attend funeral services to show respect to the hero, as well as shield the mourning family from interruptions.

Please join us in supporting this selfless nonprofit organization of volunteers who do so much for our real life American heroes.

PAPERBACK PRE-ORDER
To be collected at MMM19

VIKING
Sapphire Knight
When it comes to his club and his woman, he’s a savage. Always has been, always will be.

HATCH
Piper Davenport
When the beloved Sargent at Arms for the Dogs of Fire MC finds himself falsely incarcerated, his woman must move heaven and earth to release him, while holding back a pack of ravenous bikers whose bite is worse than their bark.

ABOUND WEDDING
Ryan Michele
Cooper and Bristyl are tying the knot. With the Ravage MC in attendance, what could go wrong?

“GUST” LOST VALKYRIES MC
Esther E. Schmidt
Have you ever disassembled a ticking bomb? I have. Steady as fuck hand, the longest last breath, and the will to live. There’s nothing I can’t do and I have to admit, with all my brothers claiming an Old Lady, I’ve been craving to claim one. Circumstances aside, I never in a million years thought it would be Paisley.

SERVICE AND SACRIFICE
MariaLisa deMora
Amanda lost her husband to war. Alex lost part of himself. Together, they’ll discover hope and peace can be found in the most unexpected of places.

ONE WEEK
Colbie Kay
I’ve never been a man to follow rules, but one night I went too far, crossing lines that should have never been touched. I’m about to break the rules again, but this time I’m ready to make her mine. Only one problem stands in my way, she’s getting married in one week.

OUR NOTORIOUS NIGHT
K E Osborn
Doing deals in a hotel room seemed like the safe option. No outside eyes, no mess, no damn fuss. What I didn’t count on was being blindsided by a feisty maid who ended up seeing far too much. Now she’s a problem – my problem. But maybe that problem will surprise me in a way I never saw coming.

DUKE
Jack Davenport
Home from a war my country hated me for, I’m looking for my place in the world, managing to find myself in jail instead. But when a vision of perfection walks up the jailhouse steps, I’m lost. Now I just have to convince her to get lost with me.

VIPER
Lilly Atlas
With his shiny new patch and legacy blood, Viper’s life is dedicated to one day becoming president of the Devil’s Tribe MC. One look at the beautiful and terrified Cassandra has him questioning everything his club stands for. Never had loyalty to his club taken a back seat, but how could he ignore the pleading in those green eyes?

WRAITH
Kathleen Kelly
The Harbingers of Death MC have wronged me. They don’t know it yet, but I’m coming for them. They will all pay. For she will be avenged.

SPADE
Harley Stone
When a near-death experience brings a sexy Latino biker into her life, Jessica will be tempted to throw her cautious nature to the wind. Will Spade’s charm and panty-melting smile be enough to make this good girl go wild?

WHISKEY RIDER
Vera Quinn
Two people on different paths when their world’s collide. One by chance and the other by plan. No promises made but even the best of plans can unravel over time.

BIRTHRIGHT
Shelly Morgan
Gemma DelBene is the daughter of the most infamous mafia Crime Lord and sister to the next in line. But what happens when her mother and brother are brutally murdered and her family is left without an heir?

DEMETRI
Sandy Alvarez & Crystal Daniels
Demetri- Ruthless ruler of the Volkov empire. If you’re not with me your against me. I give no second chances. Glory Keller- she’s feisty, independent, sexy and I’m going to make her mine. Thirsty for power, someone crosses the line, threatening to take her and my empire away from me. Now, I’m out for blood. No use in hiding from the devil himself- I will find you.

THE BIKER’S PROTECTION
Daphne Loveling
When a mysterious biker starts hanging out in the bar where Samantha works nights, she thinks he’s just interested in a one night stand. What she doesn’t know is that she’s been placed under Crow’s protection… and he’s about to risk his own life to keep her safe.

OUTLAW JUSTICE
Jaime Russell
Justice needs to be served. But whose way; his or hers?

TAKEN TO THE CLEANER
Ginger Ring
You know you’re having a bad day when the man hired to keep an eye on you is one that makes people disappear. Permanently.

HEX
Morgan Jane Mitchell
When Onyx O’Connor’s father dumps her in their old home town, a tattooed, bad boy takes an interest. Discovering he’s not who he seems, she finds out, neither is she

PELIGRO
Angie M Brashears
In a world where love is a ghost story, no one is safe. Not even familia. Peligro.

RECKLESS ANGELS MC
Amy Davies
Reckless Angels MC are my life. I work hard and play hard and can have any woman I want, but there’s only one woman for me. Why do I push her away when all I want to do is to pull her close to me and never let go? It’s time I work hard to get my own angel.

STYX AND STONES
Kristine Allen
I’m the Enforcer for the Demented Sons MC, I don’t do beach hook-ups with a prim-ass school teacher. And I sure as hell don’t obsess over the chick afterward. But that’s exactly what I did.

RYDER
Crimson Syn
Hate simmers between the Hellbound Lovers and the Devil’s Syndicate. But when love and jealousy collide, decisions will be made, and there’s no saying who might get burned.

BADGER
Teagan Brooks
When the girl who broke his heart years ago shows up at the Blackwings MC clubhouse for the president’s daughter’s wedding, Badger, the VP, is not only shocked, he is pissed. But a few words from his best friend’s wife leaves him with more questions than answers. And Badger never lets anything go unanswered.

TORQUE
Linny Lawless
Torque, the owner of Hardcore Cycles is only focused on one thing, the V-twin engines that come into his shop. There’s no time for women or love, that is until Ronnie, a raven-haired beauty comes into his sights. When the biker beauty needs help, Torque’s primal instincts kick in, and there’s no stopping him when it comes to protecting the woman he loves.