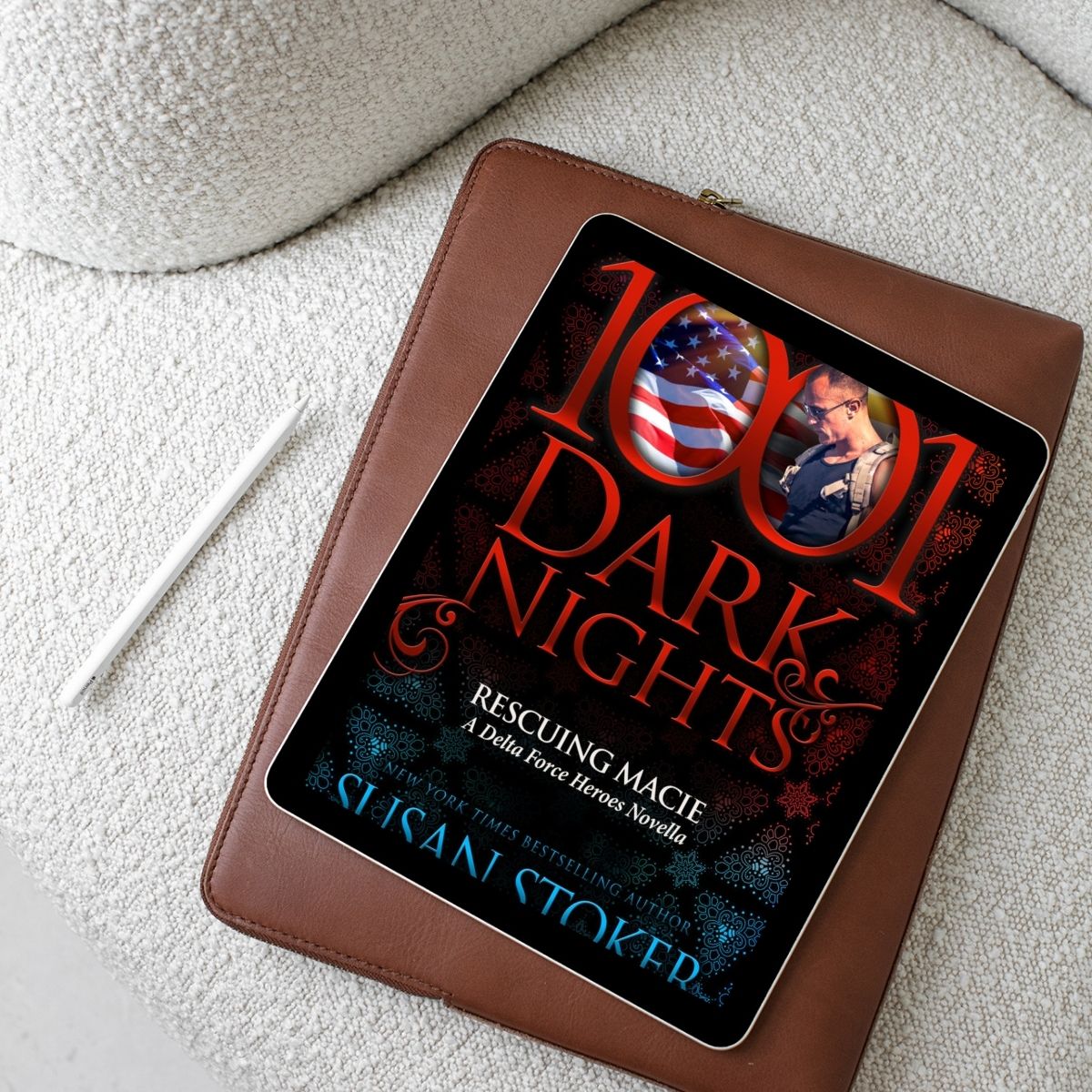 After years of estrangement, Mercedes Laughlin has finally reconciled with her older brother. It should be the happiest time of her life, getting to know Truck and his new wife…and it would be, if an ex wasn’t causing her trouble. Add in Truck’s boss, Colonel Colton Robinson, an amazingly distracting man whom she met under embarrassing circumstances, and Macie’s got a bit more on her plate than she can handle.

From the moment they met, Colt was fascinated by Macie, and helping her through an anxiety attack at her brother’s wedding didn’t diminish the appeal. He’d do his best to sweep her off her feet, if not for a little voice telling him to tread lightly—until a frantic phone call changes the plan. Macie’s being targeted, and Colt’s determined to keep her safe while he and her brother eliminate the threat.

Colt isn’t about to let his friend lose his sister again so soon…or miss his own chance at a happy ending with Macie before they’ve barely had a beginning.

**Every 1001 Dark Nights novella is a standalone story. For new readers, it’s an introduction to an author’s world. And for fans, it’s a bonus book in the author’s series. We hope you’ll enjoy each one as much as we do.**

Macie had no idea what Colt was doing with her brother at two-thirty in the morning, but she couldn’t deny that she was extremely grateful. She didn’t even flinch when Colt called her brother Truck. He’d apparently been given the nickname when he’d joined the Army. She was trying to remember to call him that, but because he’d been Ford to her as long as she could remember, it was tough.

And as much as she knew her brother would’ve helped her, hearing Colt’s steady voice kept her grounded. She remembered after Truck’s wedding, when she’d been having an anxiety attack, he’d held her against him and talked to her in his low, rumbly voice. How much it had helped. He’d calmed her and helped pull her out of the dark place her mind had gone.

The same was happening tonight. She’d been panicking and running headlong through the parking lot, with no idea what to do or where to go, when he’d forced her to pay attention to her surroundings. He gave her something to concentrate on, and it felt good to let him take over and tell her what to do.

She had no idea why he hadn’t called her after her brother’s wedding. He’d asked her out and she’d badly wanted to spend more time with him, but he hadn’t called. Hadn’t gotten in touch with her. His rejection had hurt, but she really wasn’t surprised. She was a pain in the ass and no one as amazing as Colt would want to be with her.

At the moment, however, she had more pressing issues to think about. Looking back toward the building, Macie didn’t see any sign of the men who’d broken into her apartment, but she could hear their footsteps. Macie ducked behind a car and dropped to her knees.

She winced but ignored the pain and crawled between a row of cars, making sure to stay out of sight. Then she lay down on her belly and crawled under one of the cars in the lot. She was wearing a tight tank top and her sleep shorts, because she hated to feel constricted by clothing when she slept.

She opened her mouth to respond when she heard one of the men saying to his friend, “She has to be this way. We’ve checked all the other cars.”

It felt like she was having a heart attack. Her chest was tight and she couldn’t get enough air into her lungs. But she couldn’t gasp for oxygen because they’d hear her.

Macie mentally berated herself for calling her brother and not the police. If she’d called 9-1-1, they’d probably be here by now.

New York Times, USA Today, #1 Amazon Bestseller, and Wall Street Journal Bestselling Author, Susan Stoker has a heart as big as the state of Tennessee where she lives, but this all American girl has also spent the last eighteen years living in Missouri, California, Colorado, Indiana, and Texas. She’s married to a retired Army man (and current firefighter/EMT) who now gets to follow her around the country. She debuted her first series in 2014 and quickly followed that up with the SEAL of Protection Series, which solidified her love of writing and creating stories readers can get lost in. To learn more, please visit Susan Stoker’s website.