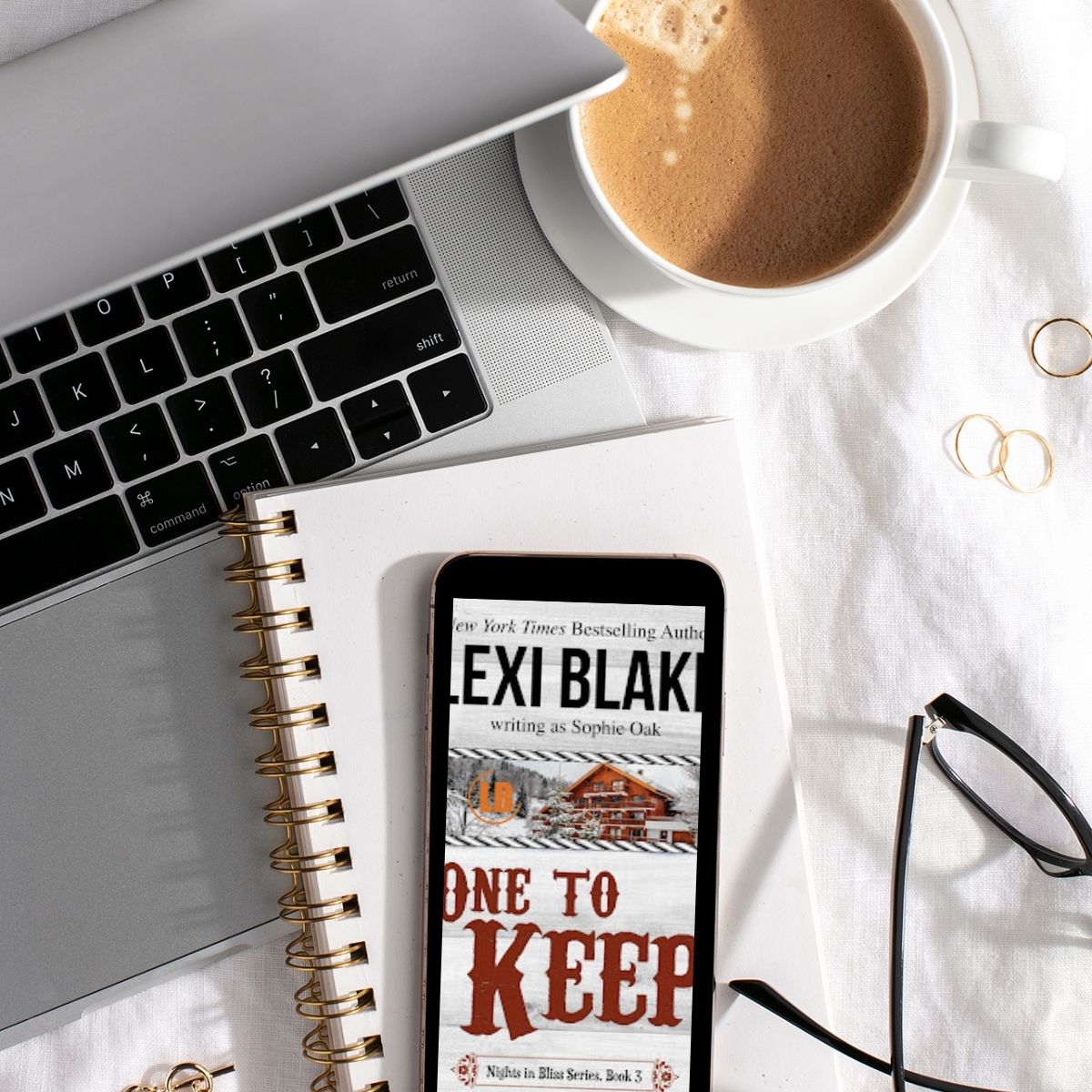 This is one of my favorite books in this series! while not menage like many of the others there is just something about Jen and Stefan that I have always enjoyed! 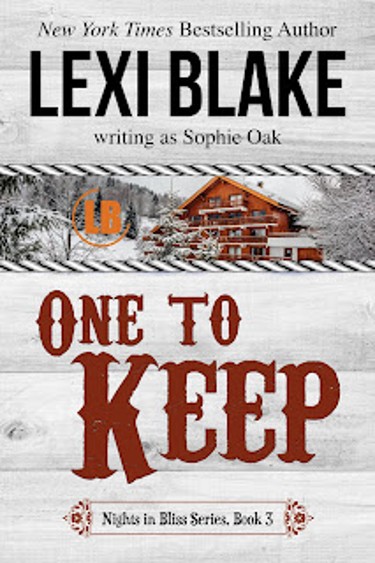 Stefan Talbot likes order and control. He approaches his life with the same meticulous precision that he uses to put paint on his canvas. Nothing good comes from chaos, and that is why he has refused to allow himself to get close to Jennifer Waters. They are like fire and ice. Though she is younger, her talent as an artist is unquestionable. But she lives her life like she paints—with wild, passionate abandon. It is intoxicating and terrifying, and he can’t get her out of his head.

Jennifer ran from Bliss to put Stef behind her. She had come to the mountain town seeking a mentor but found much more than she bargained for. Cool and distant, Stef was like a marble statue and no matter how hard she tried, she couldn’t break through his shell. She moved to Dallas to start over, but nothing is going as planned. When the art gallery where she works is robbed and a precious painting is stolen, Jen is accused of the theft. Jen is thrilled when her bail is met, until she realizes her savior is Stef and he has a few conditions. First and foremost, she has to return to Bliss.

Against the backdrop of the Winter Festival, Stef and Jen’s attraction catches fire. But the dark forces behind the robbery in Dallas have followed Jen home. A criminal syndicate believes she still has the stolen painting and they’ll kill to get their hands on it.

I read this book a few years when I was first introduced to Lexi Blake writing as Sophie Oak. At the time I didn’t know they were one and the same. I loved it then but I have to say now with the addition of the Ian Taggert it is so much better. his little bit of snark and cameo ties the two series together beautifully, without taking anything away.

If you don’t already know Mrs. Blake is re-releasing her Nights in Bliss, Colorado and Texas Sirens books and tying them into her Masters & Mercenaries a little. It it never too much, they include a new scene here or there. With this one what was once  nameless security people becomes Ian Taggert and his team.

Stefan Talbot has always been one of my favorite characters. He is rich, well liked, and so often called the “King of Bliss.” That statement could not be more true. If Bliss needs something, like a doctor, Stef gets it for them. No questions ask. Someone needs money to start a business or go to school, he takes care of it. Bliss became his home when he was a child after his mother left. His father left him there and returned to Dallas. So the town of Bliss raised him and they did a wonderful job.

Jennifer Waters has been in love with Stefan since the first day she met him. However, he always tells her she is too young. After a passionate night together he shatters her heart and she leaves Bliss in an effort to save herself the embarrassment. However, when she finds herself in jail King Stef is right there bringing her back home. Now they have a mystery to solve and an attraction to figure out.

These two are so stubborn and I couldn’t think of a better woman for Stefan. Jen is so great and I love how much she loves Bliss. It is a quirky town that an artist like her can appreciate.  We meet some new characters, find out that someone is related to an M&M character and so much more. If Bliss, Colorado was a real place I would move there in a heartbeat!

Stef turned back to Jen. “Let’s move, Jennifer. I have a plane ready. We need to be at Love Field in an hour. I have an officer waiting to process you out.”

Cool, gray eyes slitted, and she could practically feel the will rolling off him. Stef was tense, and she knew it was a bad idea to push him, but she couldn’t help it.

“I’m serious, Stef. I’m not going anywhere with you.” She couldn’t go back to Bliss. Panic threatened to swamp her. He was here. He was right here in front of her, and her heart didn’t give a damn that he was a bastard. For the first time in months, she felt desire for something besides her art. She couldn’t, wouldn’t, go down that path again.

He got into her space, a move he’d perfected seemingly long before he met her. She held her ground. Even though he didn’t touch her physically, he seemed to surround her. Suddenly her whole world was Stef, his gray eyes, the heat of his body, his masculine, clean scent. He filled her every sense.

“I’m not going home with you.” She forced herself to say the words.

His lips hitched up. “At least you admit Bliss is your home.”

That wasn’t what she’d meant. Bliss, Colorado, had felt like home when she’d been there, but she knew beyond a shadow of a doubt that Bliss wasn’t big enough for the two of them. “It’s your home. Hell, Stef, it’s your little kingdom, and you like to play the king, don’t you?”

“Yes, because everyone does what I say.” Stef’s low growl made her breath speed up. “Everyone in Bliss bows down to me. Have you been gone for so long that you forget Max regularly kicks my ass? And Nell and Henry are currently protesting my gardening practices.”

He was too close for comfort. She gave in and took a step back. She could see plainly that he was satisfied with her discomfort. “Don’t try to play the poor rich boy with me. You’re a puppet master. You like to pull the strings and see how people dance. Well, I’m not in your kingdom anymore, and there’s no way you can get me there again. So you can take your money and go back to Colorado.”

It was stupid. Even as she said the words, she wanted to take them back. She’d spent the last twenty-four hours terrified in a jail cell. She would have to be the stupidest woman in the world to turn him down, but she’d never thought around Stef. Since the moment she’d met him, she’d been a quivering mass of emotion and desire every time he entered a room.

“Stubborn thing. I’ll make it easy on you.” His hands caught hers, and before she could think she felt cold metal surrounding her wrists. He flicked the cuffs on with the cool precision of a man who often cuffed the women in his life.

“What are you doing?” She stared at her hands. At least this time they were in front of her. She preferred it that way. Damn, her life had taken a wrong turn when she could compare and contrast her experiences with men who handcuffed her.

“Taking you home, Jennifer. Whether you like it or not.”

He leaned down and picked her up. She was in his arms, nestled close to his chest. She looked up at the square, inflexible line of his jaw. His arms tightened around her, and she was caged more closely than she’d been in the holding cell. She had the suspicion that this time Stef would be harder to escape from than before. He kicked open the door and started down the hall.

Yep, like it or not, she was going back to Bliss.

New York Times bestselling author Lexi Blake lives in North Texas with her husband and three kids. Since starting her publishing journey in 2010, she’s sold over three million copies of her books. She began writing at a young age, concentrating on plays and journalism. It wasn’t until she started writing romance that she found success. She likes to find humor in the strangest places and believes in happy endings.