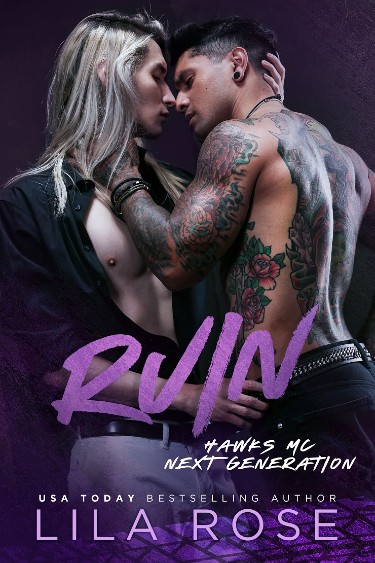 Joshua “Ruin” May has been a dick in the past. He’s trying to rectify one such dickish moment by helping out a friend, and he wants to make sure this time he doesn’t let her down. His journey leads him to Melbourne and a whole heap of unexpected trouble, namely an irritating crime boss.

A man who gets on his nerves and seems to revel in winding him up.

The good-looking douche sparks something unexpected in Ruin, leaving him confused.

With so much to lose and potentially everything to gain, Ruin has a choice to make. Will he figure himself out and make the ultimate decision that will change his future?

NOTE: This is the second book in the Hawks MC (next generation) series and it revolves around Ruin (Stoke's son) finding his love interest more than club life.

Out Gamed, Outplayed, Out to Find Freedom , Never a Saint , Country

I loved Ruin aka Josh since he was a teen. Now as an adult he is a ladies man and makes no apologies about it. I mean come on, he grew up with the Hawks as role models, how could he not have an arrogant sweetness that the ladies love?

However he suddenly finds that his famous nether regions only begin working when Wolf is around he is in a bit of a tail spin. He really grew in this book and I will say that this reminded me why I love not only the series but Lila Rose as an author. She writes the suddenly realizing your in love with someone who never dreamed of so well.

Wolf was an awesome character. as the head of his family he carries his authority like a cloak around him. He is very serious but there is a softer side that was very surprising. The journey he and Ruin take not only brings them closer but lets us understand them both better.

I can’t wait for the next book in this series and see where this amazing journey takes us. What I do know is that I will be there for the ride all the way.

Wolf looked to his watch. “I have to go.”
“Okay.” I nodded.
His gaze dipped down my body. “Are you sure you want me to go?”
My gut twisted. I looked down and saw I was half hard. “It’s called mornin’ wood.” And that was all it was. It had nothing to do with the guy in the room who looked at me like I was dessert.
Christ. It really didn’t.
“You weren’t before.”
“I was, you just didn’t notice, and why the fuck am I explainin’ anythin’ to you?” Turning my back on him, I adjusted myself and begged my dick to quit trying to get attention from just anyone.
Wolf chuckled low behind me. “I think he likes my attention.”
“You’re wrong. I’m goin’ for a shower.” I started for the bathroom.
“See you tonight, Ruin,” he practically purred.
I flicked a hand over my shoulder. “Whatever.”
More laughter followed before my bedroom door closed. I looked down at my dick. “What the fuck, man?” Of course I didn’t get an answer, but I swear to Christ, my dick had a mind of its own.

Humiliated years earlier when in high school, Channa Edwards never expects to see her knight in shining armour again. In fact, she really doesn’t want to, but of course, life wants to mess with her again. It’s just by luck he doesn’t recognise her, and for a blissful moment, she thinks she’s got away with it.

That’s until another situation brings her knight back into her life.

Cody “Coyote” Marcus, son to the Hawks MC president, goes through life easily. He has a great family, a business he loves, and women if he wants them. Then, by chance, he meets a cute, bumbling baker, who doesn’t seem to want anything to do with him.

Of course, he has to change that, and make Channa see he’s worth getting to know on all levels.