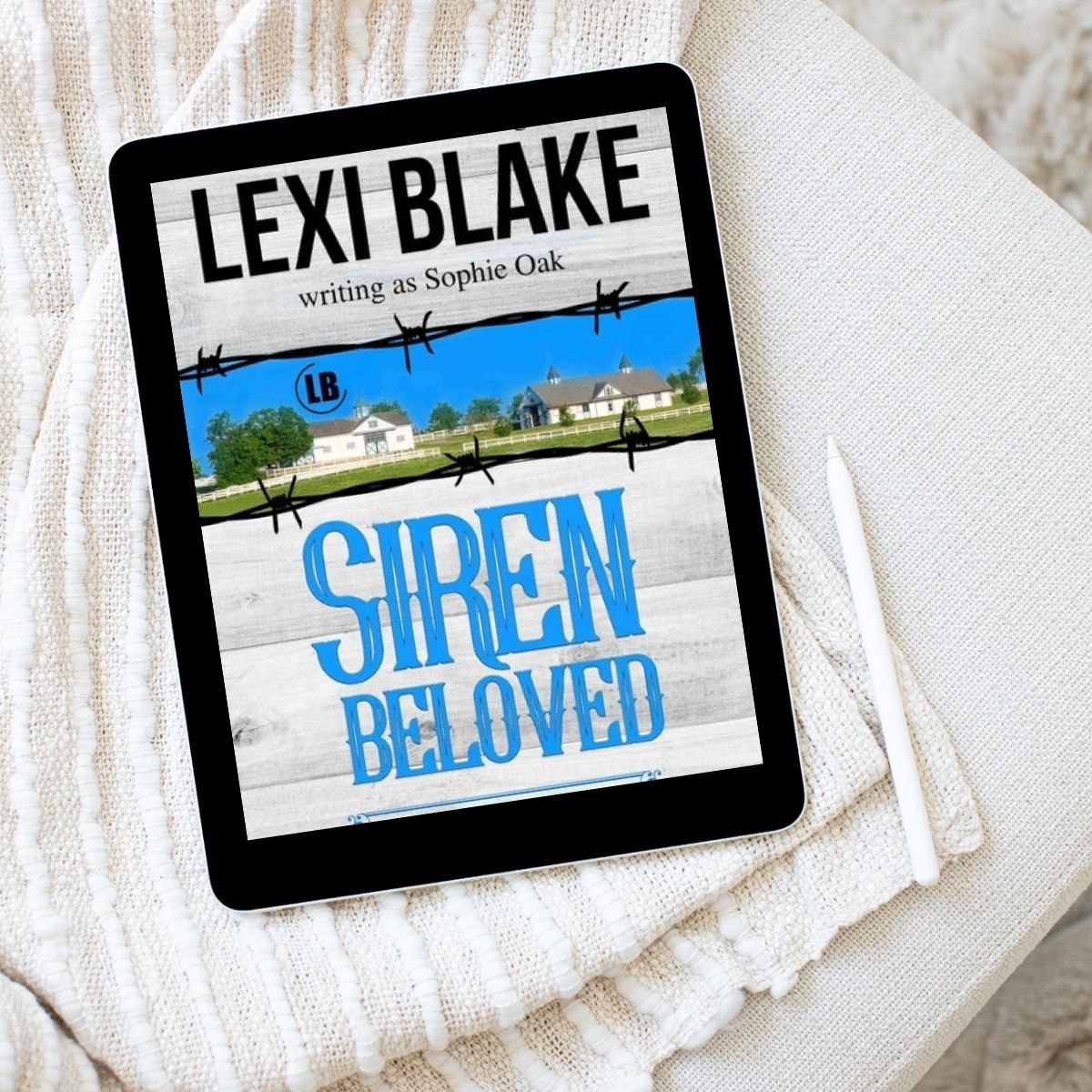 If y’all don’t already know Lexi Blake is one of my favorite authors! However before she began writing her Masters & Mercenaries novels she wrote under the name of Sophie Oak and is now re-releasing those books with updated covers and added scenes. She is working to tie all of her series in together in some small way. Such as has the M&M people show up in cameos in theses earlier works. Today I have an awesome excerpt for you from her newly re-released Siren Beloved. It is the fourth book in the Texas Sirens series.

Aidan O’Malley walked away from his fiancée, Lexi, and their best friend, Lucas, after a night of passion left him shaken to his core. Years later, Aidan returns home from Iraq haunted by all he has lost. The enemy broke his body, destroying his dreams of a career in music. Worse still, he lost Lexi and Lucas. That damage he’d done all by himself. While he can’t restore what combat took from him, he’s determined to reclaim the two loves of his life.

Lucas Cameron is a changed man. After connecting with his brother, he found the discipline to get his life on track. His legal career is flourishing, but his love life is a train wreck. The woman he loves is spiraling out of control. After Aidan abandoned them, Lucas and Lexi clung together but no matter how hard he tries, Lucas can’t find a way to heal the wounds that Lexi carries.

Lexi Moore feels like a jigsaw puzzle with too many missing pieces. Losing Aidan was hard, but the true reason for her shattered spirit is a secret she only shares with her beloved Lucas. She knows she is drowning and the time has come to heal, but the holes in her heart hold her back from moving on. Shedding the burden she carries is her only hope for a happy future, but she fears she will never have the strength to reveal her secret.

When Aidan walks back into their lives, Lucas and Lexi know everything is about to change. But as they fight to reconcile their past and reclaim what they lost, a vicious predator stalks Lexi. In order to stop the killer, all three must confront the secrets they’ve carried…before they’re buried by them.

Lexi realized she was in serious trouble the minute the words left Lucas’s mouth. Hell, she’d realized she was in trouble the minute she opened her mouth. What was she thinking? She knew damn well how to behave in a dungeon, but something about this Master made her want to push him. Damn it. She’d been this way all of her life. She had to push. She thought about taking a step back, but before she could make her feet move, Master A had her in a fireman’s hold.

“Hey!” She shouted as her world upended. She turned her head up to throw a desperate look Lucas’s way.

Lucas stood there, a stony cold look on his face. In that moment, he was all Dom, and she’d never seen him look hotter. There was a confidence about him she had rarely seen when he was around her. Lucas was utterly in command at work, but his surety faltered when she walked into the room. Even when he performed a scene with her, she knew he worried about her comfort. He didn’t look worried now. He looked ready.

Her heart started to pound as Master A turned, and she lost sight of Lucas.

“I need a chair, Lucas.” The words came out of the Master’s mouth like a judge delivering a sentence.

“Yes, Sir.” Lucas’s words were silky smooth. There was not a hint of hesitation now. She could hear him moving to do Master A’s bidding.

“What do you think you’re doing?” she asked, though she was a bit less hostile now. She’d fucked up. She was glad Julian wasn’t around to witness it, though Leo would probably tell him. Tears pricked her eyes. Damn, she was proving to Leo she couldn’t handle the lifestyle. “Look, Sir, I’m sorry. It was wrong of me to be rude to you, but I was merely pointing out that Lucas and I had a plan for tonight.”

Reason. She could reason with him, surely. It worked on all the men in her life. Of course, usually she was looking at them instead of trying to plead her case to a group of back muscles. The muscles were unbelievably tight, but his skin—oh, his skin had been decimated in his lower back. It was a mess of white, puckered flesh, and she could see both neat, surgical lines, and jagged edges. She reached out to touch the mass of scars, but she was jerked back over his shoulder and set on her feet before she could make it. She wobbled on her heels, but Master A’s big hands held her shoulders.

“I don’t think you understand how this is going to go, sub. I am the Master, and you are the one being punished. I won’t put up with a spoiled princess telling me how her punishment will go. It will go the way I say it will go. First, you will pay for the insult to me, and then we’ll proceed to the sawhorse.”

“I don’t like the sawhorse.” The words came out breathy and small, because she was beginning to understand that this was serious.

Master A didn’t look like he was planning on giving in. And she hated being called a spoiled princess, but a part of her worried that he was right. The last few years, she’d allowed herself to become spoiled and dependent. She’d fled from everything that hurt her. She’d hidden. She’d let her stepfathers and Lucas coddle and provide for her so she didn’t have to face the truth.

Master A didn’t flinch. “I don’t care. Lucas has done the best he can, but the truth is he wasn’t trained to be a Dom. He might enjoy it from time to time, but he prefers bottoming. You require a firm hand. If you don’t want it, then you’re free to leave. No one is holding you against your will. This is all about consensual play, so you have to make the choice. Do you want the session to continue?”

She hated this part. This was the part that she’d never understood. She had to make the choice, and she couldn’t put it off on anyone else. She wanted for him to simply do it. Then she could blame him later, but that wasn’t what The Club was about. She’d been coming here for over a year, and she finally had to decide to make the choice—stay and put herself in the hands of a stranger, or go and never know what it was like. And then there was the fact that Master A was right. Lucas needed something she couldn’t give him.

She cast her eyes down submissively. How bad could it be? “Yes, Sir.”