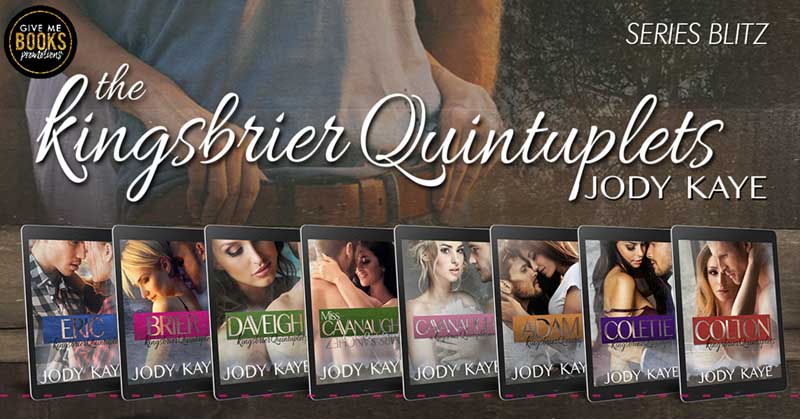 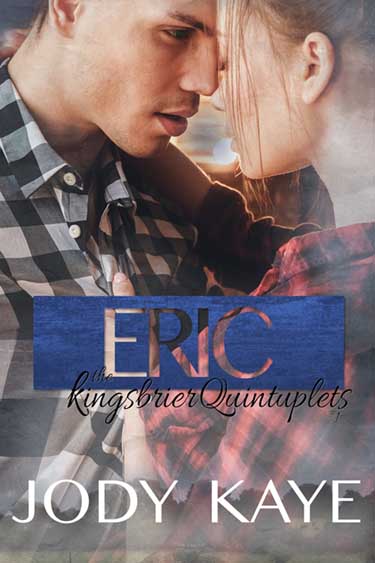 Born smack-dab in the middle of a wild set of quintuplets somehow Eric became the level-headed one. As his four siblings fly the nest, Eric’s feet are grounded in a plan to take over the family construction business. Goals. Persistence. Patience. Those paid off when he went after the quiet girl of his dreams… And someday down the line, Eric’s going to make Ginny his wife.

Ginny knows one thing: She loves Eric. His notoriety as one of the infamous Kingsbrier Quintuplets or the fact that his granddaddy left each of the quints more money than God? That means nothing because Ginny’s seen the courage of an accepting boy who has given her life stability since her father died. Yet, Ginny’s uncertain how they’ll manage to stay together when she leaves for college. Will Eric still want her four years from now?

When Ginny's forced to admit to the lengths she’s gone to keep Eric will her deceit become the roadblock that tears them apart or the stepping stone to a different life neither had imagined?

Okay I admit I had a hard time with the heroine being named Ginny since that is my sister’s name. Let’s face it’s hard to imagine a sibling in any sort of romance book role and every time I read her name my sister is all I could think about. That being said this is still a really sweet read.

Eric and Ginny have a plan which includes Eric working in the family construction business and taking college classes online. While Ginny will attend college. Well that’s the plan until a little surprise throws a monkey wrench in those plans. This the classic young couple thrown for a loop when life takes a sudden turn. They are left to navigate the new bumps in the road but they are both more than capable.

It was well written and was a great way to start the series. Jody Kaye did a wonderful job writing this particular book.

In Brier, we pick up where Eric left off. Which is something I like about this series. Yes, you can read them on their own but I really think you get so much more out of them by reading them in order. This one builds on the previous book while setting up the future ones.

Drew knew that he would be with Brier. There was simply no other option for him. He let her leave and pursue her dream, let her push him away. Now he won’t. He is not only going to make her see him but make her admit that she loves him and always has. I loved Brier! She refused to admit she loved Drew and then refused to let anyone, including him, stop her from pursuing her dream. She was a little too stubborn at times which makes Drew loving her an even better thing.

Daveigh really drew me in. I’m a sucker for a good single parent, age difference romance. They typically are really good. This one didn’t disappoint. I did feel that Daveigh was much stronger than she got credit for at times. She had an inner strength that I hadn’t seen in her other siblings up to this book. She knew years ago that she wanted her father’s manager. What she didn’t know was that Cris felt the same way.

I mean how well will being love with the boss’s daughter who is younger than you go over. Cris certainly had issues that he needed to deal with. I think he would have never manage to get beyond his past had it not been for Daveigh. That strength I mentioned, it is the heart of these siblings even if they don’t realize it.

This is the continuation of Daveigh and Cris’ story with their wedding. It is a pretty quick read but certainly worth reading. It shows how Daveigh, Cris, and Mateo all become a family. You could skip it in the series if you wanted to but since Daveigh is my favorite so far I wouldn’t recommend skipping it. It is the perfect slice of heaven.

This is a bit of a flash back as this is the story of the quints parents. It could be read first if you wanted to read them chronically. However is is fine to read it at any point. It was a little slow for me at the beginning but stick with it because it is well worth the read.

I loved Rose Kingsbrier as a character. She may have been born with a born with a silver spoon in her mouth but doesn’t come across that way. Sadly the one thing she wants most isn’t anything money can buy. The love and respect of her father. Her father is set on marrying off so her new husband can run his company. After all his daughter can’t do it regardless of the fact that she wants to.

Ross Cavanaugh was the perfect man for Rose. He never saw the numbers in her check book. All he saw was her and everything she could be. He’s hard-working, full of compassion, and of course handsome. I mean his children are beautiful so it goes to reason him and Rose be just as pretty.

Of course there is plenty that seems to want to keep them apart. They have to work through it all. I do need to say that this was does touch on some tough subjects so it could be a trigger for some.

I really enjoyed this book. I know I say that about each one but each one is truly great. Adam wants to ask Temple’s sister Tessa to the prom. However an encounter leads him to think Temple may be the right girl for him. Years go by and they run into one another again. The attraction is immediate but Temple is not a woman to be easily swayed. They develop a friendship that will hopefully help Adam admit some hard truths. Their friendship blooms into more the more time they spend together. Maybe Adam wasn’t wrong all those years ago and Temple truly is the woman for him.

Okay, I thought Colette would end up with Colton. I was surprised that she didn’t. Both Colette and Devon have a lot to overcome. I’m talking eating disorders and a father killing a mother. It’s a lot but after reading the story I don’t think Colette would have worked with anyone but Devon. He won me over in a big way. This one also sets up Colton.

This is my favorite of the series and I can see why Jody Kaye saved the best for last. Colton went to war only to come home and have an accident with a tractor. It leaves him crippled, angry, and just ready to give it all up. So his family brings in Keely, Ginny’s sister, to help him. Keely and her daughter move in with Colton and well it’s an adjustment.

This one is certainly about recovery as much as it is about love. Recovery that while obvious Colton needed I think Keely and her daughter did as well. They all not only recover and heal together but in the process find love and become a family.

This is the one book in this series that CANNOT be read alone. You must read at the least the one before in order to understand it. Like I have said before in my opinion you need to read them all so you can experience this wonderful family.