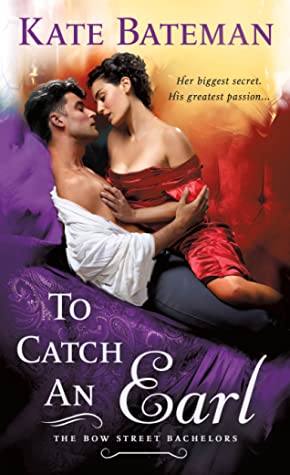 A case of secret identities finds reunited lovers on opposite sides of the law in this fun, flirty Regency romance.

There's only one case Bow Street agent Alex Harland, Earl of Melton, hasn't cracked: the identity of the mysterious woman who stole a kiss from him before he left for war. He's neither forgotten--nor forgiven--her for leaving him wanting. When he starts investigating the Nightjar, an elusive London jewel thief, he keeps running into the alluring Emmy Danvers, who stirs feelings he hasn't felt in years.

Even though Emmy's loved Alex for years, she can't risk revealing her heart, or her identity as the Nightjar. With Alex on her case, Emmy knows that her secrets are in danger of being discovered. Their cat and mouse game heats up with every interaction, but when Emmy's reputation--and life--is at risk, will Alex realize that some rules are made to be broken for love?

I really loved the idea of a woman jewel thief. Especially during the 19th century, add in the act that she eluded police and I was looking forward to this read. That being said, I had a difficult time getting into this book. I’m not sure if was the characters or what but in the end this was just didn’t do it for me. The idea of the story is great and it made be the next best read for some.