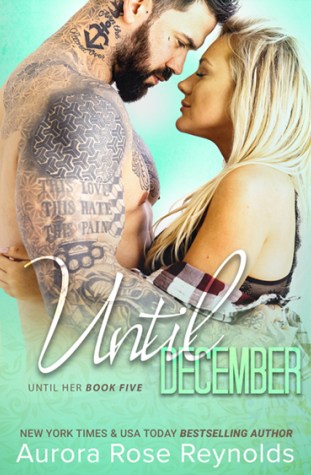 Rating:
Until December by Aurora Rose Reynolds
Series: Until Her #4

Gareth Black is drawn to December Mayson the moment he spots her across the room at her cousin’s wedding. When he approaches the beautiful woman, she captivates him with her shyness and wit, making him crave her.

With a pull so strong it’s impossible to ignore, December knows there’s something between her and Gareth. She just hopes they’re capable of jumping the hurdles ahead of them.

Two boys, an ex, a surprise that will change everything, and a disgruntled co-worker, guarantee these two will have their work cut out for them if they are going to find their happily ever after.

Until Talon, Until April, Until May

It took me a few minutes to realize that Gareth was actually Harmony’s neighbor. I remember him from her book. I always love reading any book when there is a Mayson in it. You just know it is going to full of love, hot chemistry and more. I will say that this one isn’t as full of the crazy as some of the others. There is no blood shed or crazy person following them but I think for this book you didn’t need it.

Gareth does have a crazy ex who attempts to bring full on drama but not in the way some of the others have had in the past. His sons were so wonderful and I found myself falling in love with those two boys right away. It was hard not to love them. There was a moment I wasn’t sure I was going to like Gareth but he redeemed himself.

December (yes that is her name and she has sisters named June, July, April, and May) is the good girl. You know the one you can depend on to not drink, to do everything she is suppose to do. At first I thought she was a little too goodie two-shoes but I learned that she was much more than just the good girl. It was easy to love her as a character. She was genuine which is rare. She wasn’t afraid to let her geek flag fly and I love she takes her kindle everywhere with her.

If you haven’t read any of Aurora Rose Reynolds then I highly suggest that you rush to buy any of her books. You can pick up any one of them and just fall in love. Of course all of the Maysons are some of my favorite characters of hers but all of her work is awesome.

Enter below for your chance to win a Coach bag, a $50 Amazon gift card + a signed paperback copy of Until December (3 winners, open internationally)