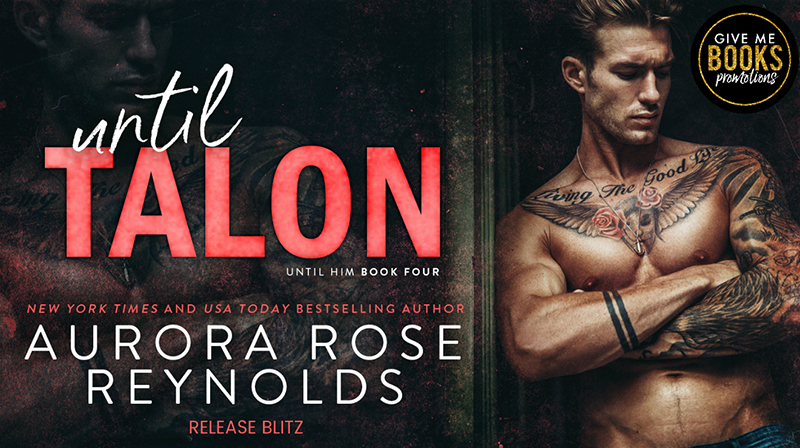 Rating:
Until Talon by Aurora Rose Reynolds
Series: Until Him #4
Genres: Contemporary Romance

When Mia Allenton’s sister calls, asking her for help after finding out her husband cheated, Mia packs up her life in Montana and moves to Tennessee to be there for her and her three girls. As Mia begins to settle in, a tornado comes through, bringing along with it Talon Mayson, a man determined to prove to her that good men do exist.

Talon knows he’s got his work cut out for him when it comes to earning Mia’s trust, but slowly her walls start to crumble, and they begin to build something beautiful. Unfortunately, someone from Talon’s past isn’t happy about him being back in Tennessee, and they’re willing to do anything to prevent him from ever being happy.

Is the Boom between Talon and Mia strong enough to weather the storm that’s coming?

Until December , Until April, Until May

Another Until Him book? Yes, please! I could not wait to devour this book and Aurora Rose Reynolds doesn’t disappoint. As always she brings us the BOOM in the best possible way.

Mia was an easy to like character. Her sister got a divorce and needed her help so she dropped everything and moved to Tennessee to help her. She got a job as a salesperson at the local car dealership and was doing alright living with her sister and nieces. That is until a tornado puts her on the path with Talon and she discovers that l love isn’t all bad.

Talon Mayson is like all of the younger generation Maysons, they don’t believe in the BOOM until it happens to them. He is the son of Nico and Sophie (two of my favorite characters) and has no problem supporting Mia in everything. He immediately falls for Mia and it is so great. He understands her need to help and support her sister and loves all the more for it.

There is some drama from outside forces. One of those being Mia’s sister’s ex-husband who is a jerk in my opinion. The other gives enough drama and mystery to add to the story line. Although I will admit that when it all comes out who is doing everything and why I was shocked. I mean talk about plot twist! I thought it all had to do with one thing and it was totally something else.

Mia’s mother and step-father are two awesome side characters. Mia talks about her mother struggling and you get to see how much her step-father settles her mother and how much he means to the girls. One thing I hope we get in the future is the story of Mia’s sister and Winston. There is something there and I would love for it to be explored more.